The Giraffe (Giraffa camelopardalis) is the tallest land animal on earth, standing up to 6 metres- 20 feet in height. They achieve this remarkable stature predominantly through their exceptionally long legs and incredible neck which can itself measure 2 metres- 7 feet tall. What is even more astounding is that this remarkable neck contains only seven (7) vertebrae, identical to the number of human neck bones. 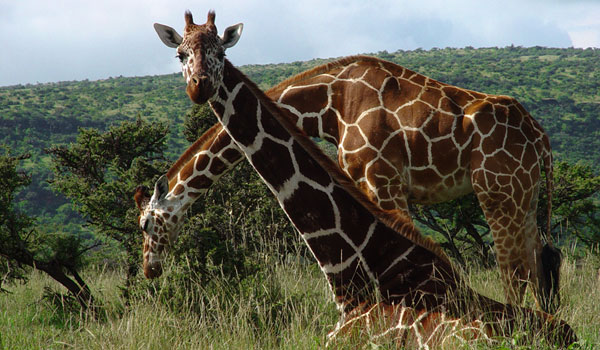 It is the rule within the Mammalia class for the skeletal system to encompass seven vertebrae; nowhere would an exception to this rule be more expected than in the Giraffe. Surprisingly though these ruminant mammals adhere to the class rule! Each vertebra can measure up to 11 inches -28cm in length and together with the weight of the skull can weigh up to 270Kg- 600pounds. This weight is support by amazingly strong neck muscles and an elongated Nuchal ligament.

Humans similarly possess seven vertebrae, although we are able to pack them into a much smaller packet! We also have a Nuchal ligament; however this is not developed and/or utilized to the same degree as the Giraffe.

Scientists are divided as to the reason why Giraffes evolved with such an extraordinary skeletal feature. It has been observed that Giraffes feed from the tops of Acacia trees as well as savannah grasses so such an easy ‘tree-tops’ theory has come under scrutiny. Another theory is that males with longer/stronger necks win the frequent ‘Neck Battles’ for mating rights so passing on the long neck genes fails to explain why females are similarly endowed.

Whatever the reason, Giraffes are an extraordinary animal and for humans to possess the same number of bones in their neck is one of nature’s wonders!