In Proverbs 6:16-19, King Solomon states ‘There are six things the Lord hates, seven that are detestable to him: haughty eyes, a lying tongue, hands that shed innocent blood, a heart that devises wicked schemes, feet that are quick to rush into evil, a false witness who pours out lies, and a person who stirs up conflict in the community’. 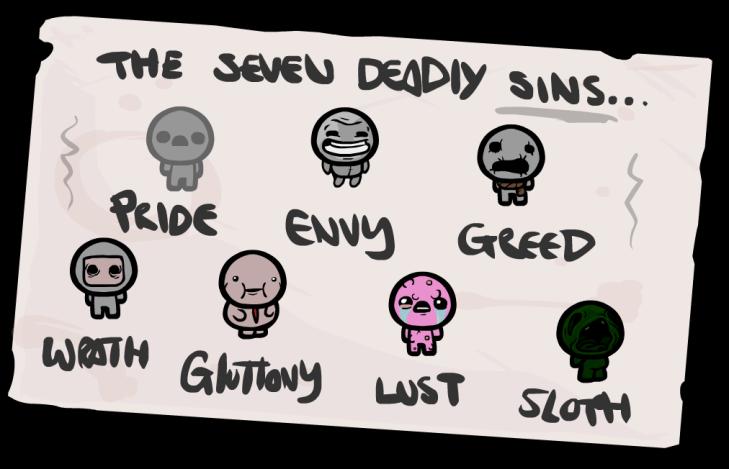 These passages complement each other quite well, with many of the commandments in Exodus warning directly against those grevious behaviors we are told in Proverbs that are hated by the Lord. We are told He hates a lying tongue and then commanded not to bear false witness.

These passages give a context by which to discuss the Seven Deadly sins, because while the creation of the Seven Deadly Sins were inspired by studying such passages from the Bible, contrary to popular belief, the Seven Deadly Sins are not actually a biblical creation. The idea of creating a list to define sin, and to warn people against sinful and dangerous behaviours that would condemn them to hell (if unabsolved), originally came about in the 4th Century.

In 375AD a Christian monk called Evagrius Ponticus, from a town called Ibora (which would be in modern day Turkey), devised a list of eight temptations we all face as human beings, with the aim of teaching people how to identify sinful behaviours, and thus avoid them.
Ponticus’ theory was that all sins had their origins in at least one of these eight behaviours, so that if these behaviours were avoided, so too would sin be.

This list was written in Greek by Ponticus, and when translated into the Latin of Western Christianity, and then English, it became: Gluttony, Fornication, Greed, Pride, Sadness, Wrath, Boasting and Dejection.

Two centuries later in 590AD, Pope Gregory the Great refined the list. He merged Boasting with Pride and called it called Pride, Sadness with Dejection giving Sloth, and he added Envy. The meanings and descriptions of these behaviours has evolved over time, but this list refined by Pope Gregory is pretty much what today is known as the Seven Deadly Sins. They are listed below in order of increasing severity as per Pope Gregory’s classification:

We understand Lust to be unbridled sexual desire, and as such it is closely linked to sexual immorality and adultery. The Bible talks about Lust as a sin we commit with our eyes, it is visual. In Matthew 5:28, Jesus said that anyone who looks at a woman lustfully has already committed adultery with her in his heart. He says that if your right eye caused you to sin, then you should gouge it out, as it is better for you to lose an eye than to be condemned to hell.

Ezekiel 23 makes a strong link between lust, adultery and idolatry. The Bible took the sin of Lust extremely seriously and said that by committing the sin of lust, you are defiling your soul.

In Proverbs, John talks about the lust of the eyes and says that Lust ‘sucks out your soul’. Romans 21 and Revelations say that the sexually immoral will not enter Heaven. In Galations 5:22 Paul talks about the works of the flesh as sinful, including sexual immorality, idolatry and witchcraft.

The Bible describes Gluttony as the desire to consume earthly things. It might be food, or sex, it might be a car or a holiday. The Bible explicitly describes this consumption as sinful, because the physical appetite can never be satiated, there is always a need for more. A feeling of ultimate contentment and satisfaction can only be reached by filling our lives with God. It is only when we invite God into our lives that we fill the void in our hearts. In Colossians 2 23-23, Paul says ‘Do not handle, do not taste, do not touch…. these are all destined to perish with you, because they are based on human commands and teachings’. In Ecclesiastes we are told that ‘All mans’ efforts are for his mouth, yet his appetite is never satisfied’.

The Bible describes Greed as the desire to ‘Store up’ or ‘Hoard’. This is opposed to the act of Gluttony, which is the desire to consume, rather than hoard. A greedy person is somebody who accumulates for the sake of accumulating. The Bible teaches that the things of this Earth are given to you, so that you may invest them in things that are more valuable. If you don’t do that, and all you do is store up and hoard, then you are greedy, and a fool. Jesus said ‘ A man’s life does not consist in the abundance of his possessions’.

Rather than an act of doing something, Sloth is rather the lack of acting or doing. It’s not in the doing of something but in the not doing that is the sin. It is important to note that it is distinct from rest, as rest is Godly, rest is good. It is laziness that is the sin, a lack of discipline, a lack of diligence in your life. The Bible promotes discipline in our lives and industriousness; there is a joy to be found in this. But to avoid work, and to go about life with apathy in your heart, to be unwilling to practice diligence, this is Slothfulness. The Bible talks about work as fundamental to living. In Thessalonians, Paul says ‘If a man will not work, he shall not eat’. There is a parable in Matthew 25 which contrasts what happens to two groups, one that is diligent and one that is slothful. It is the story of two groups of five virgins who took their lamps and went out to meet the bridegroom. One group did not take any oil with, them while the other did. By the time the bridegroom arrived, the lamps of the group that did not take oil, had gone out, while the group that did bring oil, had enough to light the way of the bridegroom. This group are described as wise and they proceeded to the wedding banquet, while the other group are described as foolish and were left in darkness unable to achieve entry to the banquet. The teaching in this story is to be diligent in what you do, that you will be left a fool if you don’t prepare. Matthew 25: ‘Keep watch because you don’t know the day or the hour’.

Wrath or anger in itself is not sinful, it is usually the acts we carry out while angry that are sinful. The Bible often speaks of the Wrath of God, so there is a good Wrath and a bad Wrath so to speak. In Ephesians 4 Paul says ‘In your Wrath, do not sin’, so it is possible to be angry and not sin. By and large, the basis of wrathful acts are often rooted in a misplaced sense of justice. Hitler killed millions of people, but wrote a book called ‘Mein Kampf’, which translates to ‘My Struggle’. Despite the horrendous acts of evil he committed, he believed he was carrying out justice. Evil and sin are very closely linked to Wrath, because of the evil and sinful things we do when we are angry. But the following day we might say ‘I lashed out, I shouldn’t have’. We acted out of a misplaced sense of justice and once we see this, we regret. Wrath is often fed by the sin of Pride – Pride is inherent in this sense of injustice, our sense that something wrong has been done against us, which is unfair and so we act in anger and we sin. The Bible condemns anger, Matthew 5:22 ‘Anyone who is angry with his brother will be subject to judgement’ and advices peace to counteract it with Matthew 5:9 ‘Blessed are the peacemakers for they will be Sons of God’.

Envy is a desire to want something that someone else has, a desire to covet. Whether we are envious of someone because they earn more money than us, or because they have a nicer house than us, envy is a sin. Envy produces jealousy which if let grown, can lead to evil in our hearts, even if we don’t act on it. This is a sin because we are being ungrateful for what we do have in life, we are disrespecting ourselves and others. Envy is a lowly feeling, and it begets many of the other sins. It can beget Wrath and we might carry out an evil act because of this sense of envy. It illustrates Sloth, because rather than being diligent and disciplined in our own lives and making the best of what we have, rather we take a lazy outlook and simply want what we see in front of us. We let someone else set the precedent and simply follow. It is also like Greed, in that it is a desire to gain things; we want, we want, we want. It is a belief that we can be fulfilled by earthly pleasures – we want to be smart, attractive, wealthy, rather than inviting God into our hearts and being filled with the Holy Spirit. It is a fruitless feeling. Envy is a behavior that is in direct contrast to humility, which is what we should be striving for because ‘They are blessed who are humble, for the whole earth will be theirs’ Matthew 5:5.

Pride was originally believed to be the father of all sins – the sin which begot all the other sins. It is a vanity about ourselves, a sense of entitlement – we Lust for things because we feel we have the right to have and to covet, we commit Wrath because an injustice has been done against us and it is our right to retaliate. We are Slothful because why should we sully our hands with work when we can have someone else do it for us. We are only thinking of rights for ourselves and, disrespecting the rights of others. The sin of Pride is grounded in a sense of self-righteousness, which is in opposition to a sense of righteousness. Righteousness is wanting to do what is right for God and for others, while self-righteousness is wanting to do what is right for ourselves. ‘Do you see a man who is wise in his own eyes? There is more hope for a fool than for him’ Proverbs 26:12.

Pride is an excessive belief in oneself, forsaking God and others. It is a blind confidence that one can live without God, an ignorance to the value in what is in others and in the world around us, and in the power of God. The Bible considers Pride to be disgraceful, and instead we should be humble ‘When pride comes, then comes disgrace, but with the humble is wisdom’. Proverbs 11:22
The order of the sins has changed over time. In Pope Gregory’s classification, Pride is the deadliest of all sins. In another interpretation, Lust is the central sin with all other sins coming from a Lust for something. For example:

Lust: lust for attention and sex
Gluttony: lust for self indulgence
Sloth: lust for avoidance
Envy: lust for possessions and personal gain
Wrath: lust for vengeance
Greed: lust for money and power
Pride: lust for greatness and supremacy

The Seven Virtues to counteract the Seven Deadly Sins are as follows:

The Bible teaches that as human beings, we are by nature sinners, and therfor inclined to commit at least some of the Seven Deadly Sins in varying degrees. There is a symmetry in having the Virtues and the Commandments to counteract the Sins and grevious behaviours that God warns us against. The Bible teaches that God is all-forgiving, and when we do sin, we are invited to confess and be absolved.

Whether you are religious or not, for most people, life is about trying your best to live by these Virtues and Commandments, as the fundamental teaching in them is to be good to ourselves and one another, which is also inherent in our nature as human beings.