In August of 2011, Andre Lumbosa took a 2-week vacation at the end of the religious festival of Ramadan and left his nine dogs alone in the house without access to any food or water. Two of the smaller, weaker dogs were eaten within the first few days, their bones picked clean by the others.

Then, on August 31, Lumbosa came home.

He left his luggage at the front door and walked in, presumably hoping to be greeted by his pets before settling in from the long trip away. What he got, however, were seven feral, ravenous carnivores scrambling for the first piece of meat to walk into the house in fourteen days. They butchered Lumbosa, tearing him apart and festooning the house with blood and body parts.

A few days later a neighborhood guard was walking by and noticed the luggage still on the front steps. As he got closer to Lumbosa’s house he noticed an odd smell coming from inside and called the police immediately. The cops had to suppress the dogs as they entered the house, neutralizing the starving animals before finding bits of Lumbosa everywhere. 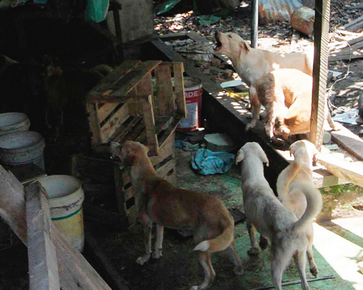 The dogs that were unfed for 2 weeks, before attacking their owner

There was no word on the fate of the dogs.

There are two things that are brilliantly ironic about this story. The first is that Lumbosa lived on Sulawesi Island, a place where it is commonplace to find ‘dog’ on the local menu. The second is that Lumbosa was a practicing Muslim, and the holiday he was vacationing after was called Eid al Fitr. Loosely translated, it means the “Feast of Breaking the Fast”.

It would seem that the dogs were followers of the faith, as well.