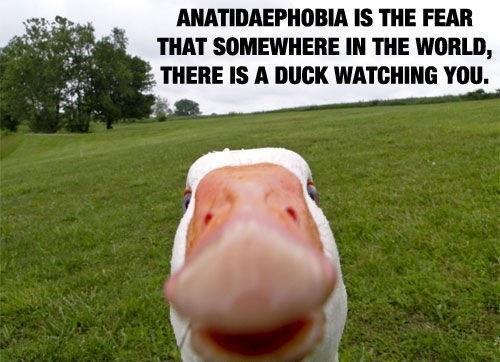 You’re probably already familiar with phobias such as Claustrophobia, Arachnophobia, and Agoraphobia. Some of you may even suffer from one or more of these common phobias that bring about hot sweats, palpitations, and a feeling of being trapped without a way to escape.

It’s understandable that people do harbour fears however irrational, but the little known fear of ducks is one which isn’t so common.

A lot of people like ducks. A lot of people will spend their Sunday mornings walking canal side or around the nearest lake, feeding their last scraps of stale bread to the grateful feathered creatures. For some there is nothing quite as entertaining as watching a raft of ducks and their ducklings waddling along a river bank, but to a person who suffers with Anatidaephobia, this idyllic scene is more likely to cause a panic.


Not only do Anatidaephobics have a fear of being in the presence of ducks, but they carry with them a peculiar idea that probably seems rather far-fetched to the rest of us. Anatidaephobics don’t necessarily need to be near a duck for their anxiety to manifest, their distress occurs because they simply believe that somewhere out there, no matter what they are doing, a duck is sitting there waiting and watching.

However irrational this may seem to you and I, a person who is carrying this horrible fear will constantly feel uneasy with a certain amount of trepidation no matter if they are at work, out with friends, or in the comfort and safety of their own home.

The vast majority of us carry a fear or two around with us; some are quite understandable while others, like Anatidaephobia are just outright bizarre.