Like waterfalls? Pretty, aren’t they? What about heights? Do you get dizzy looking down a flight of stairs or over a balcony? Then Angel Falls is not for you!

But if you like heights (or at least aren’t bothered by them), and love getting back to nature and looking at waterfalls, then head off to Venezuela! For those of you who don’t know, Venezuela is on the north coast of South America. There you will find the Canaima National Park, which is the sixth largest National Park on the planet (excluding protected areas) at just over 12,000 square miles. Angel Falls is at the top of a lone table mountain known locally as Auyan-Tepui in Canaima National Park, and these falls are the highest in the world. 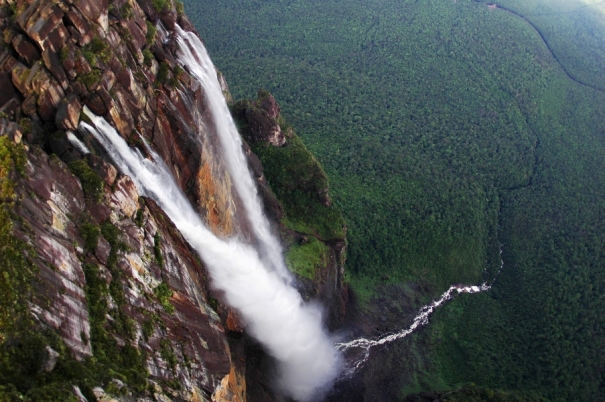 Angel Falls’ overall height is 979 metres (3,182 feet), and its longest single drop is 807 metres (2,623 feet). Now that’s impressive! In addition, the waterfall is located near the top of the mountain, and its top spillway is about 3230 metres (10,498 feet) above the Venezuelan jungles at sea level. Feeding into the Kerep River, water droplets from the waterfall are, in certain atmospheric conditions, able to be felt up to one kilometer away.

Angel Falls was “discovered” by an American aviator named Jimmy Angel, who was looking for gold when he first saw the falls in 1935. Two years later he returned to the area with his wife, but his plane crashed near the top of the falls, where the site of his crash is marked with a plaque. He and his wife spent the next twelve days walking out of the jungle with minimal supplies to be rescued. Of course, the local Pemon Indians knew about the falls long before this time and had been praying to them for centuries.

During the warmer seasons, the water from Angel Falls actually evaporates into a mist before it hits the ground, creating an eerie effect across its 150 metre (488 feet) base. Yet during the rainy season, there is so much water travelling down the falls that it splits into two!

Angel Falls attracts its share of daredevils. The sheer rock face of the waterfall was climbed in 1971 by three Americans and an Englishman (David Nott), who wrote about their adventure in his book called ‘Angels Four’. In February 1990 a group of BASE jumpers used the top of the falls as a site to jump from. Unfortunately, a jumper injured herself on landing, prompting the second jumper, Jean-Marc Boivin of France, to jump after her with a first aid kit. But his luck wasn’t in that day, and he was blown against the cliffs shortly after his parachute opened. He was unable to maneuver his chute properly after hitting the cliffs and landed badly in the tree tops as a result. He died later from internal injuries and blood loss.

In 2009, Hugo Chavez, then President of Venezuela, called for the waterfall to be renamed using the name given to them by the local Pemon Indians, Kerepakupai-Meru. Initially, he wanted to change the name to Churun-Meru but then corrected himself after his daughter sent him a note advising him of the name the local Indians gave the waterfall. Angel Falls is now known locally using the Indian name, while the common name of Angel Falls is still used for the tourist industry.

The Falls attract over 2,000 tourists a year, generating much needed income for the National Park and the local people.