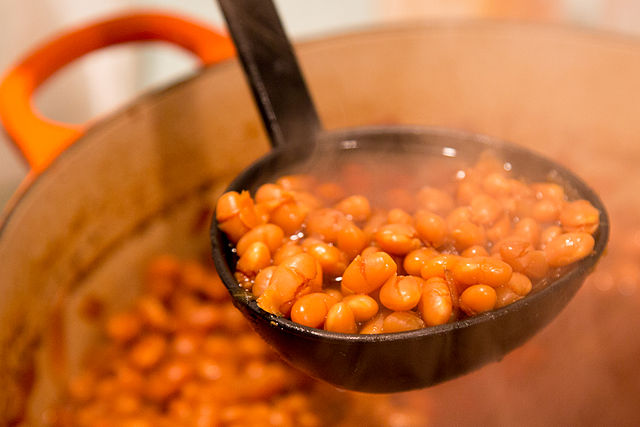 Why does one get gas from beans?

Beans contain a category of complex sugars called Oligosaccharides. These sugars have a high molecular weight and hence cannot be absorbed by the villi. Thus, they pass undigested through the intestinal tract. Once they reach the large intestine, the bacteria there starts decomposing these sugar molecules. This process of breakdown leads to a release of different gases mainly nitrogen, carbon dioxide and hydrogen. However, these gases are odourless and hence do not cause any smell. The stink associated with flatulence has a completely different source.

One third of the bacteria in your gut produces methane as a by-product of their digestion of these sugar molecules where it collects in the large intestine. However, the capacity of the large intestine to hold gases is limited and once the limit is surpassed, the gas is expelled though the rectum.

All the food that you ingest has to go through the complete digestion process to enable the body to absorb all the nutrients present in it. Try to imagine the gastrointestinal tract as an external system just contained inside the body. The digestion system breaks down the components of your food and allows them to reach the different organs where they are needed. Each component of this digestive system plays a different part in the digestive process. The mouth grinds the food into a fine paste, the stomach releases gastric juices and acids to further break down the food. From there, the food enters the small intestine where the major nutrients like carbohydrates, proteins and fats are absorbed into the blood though the villi by a process called diffusion.

The remaining portion then goes to the large intestine where water is absorbed into the system. Another minor function of the large intestine is to break down larger molecules like fibre and complex sugars such as the aforementioned oligosaccharides.

Oligosaccharides are long chain polymers of the basic components called monosaccharides. Complex molecules are usually broken down by enzymes into smaller components that the intestine can absorb. However, our body lacks hormones needed to break down oligosaccharides. Thus they pass undigested into the large intestine where they serve as food for the millions of bacteria residing there.

This process should not be seen as undesirable as it is essential and good for our health. The bacterial digestion produces a variety of vitamins and antibodies needed for good health & immunity, but the side effect is a production of gases that can lead to social embarrassment.

However, all is not lost! If you are worried that you may never get to eat beans without the undesirable side effects, then the answer is no. There are some measures you can take to prevent flatulence. One method is to sprinkle your food with a mold called Aspergillus niger which releases Alpha-Galactosidase that breaks down the Oligosaccharides before they even reach the large intestine. In case you are not comfortable with the idea of using mold in your food, you can try soaking the beans in water for a few hours. This ferments and softens the beans and the yeast that is produced consumes the main culprits i.e. Oligosaccharides.

The gut of a human typically harbours about 100 trillion microbes. This shows that the number of bacterial cells is ten times the number of normal body cells!

Each individual has a different body constitution which reacts differently to different foods. Something that causes gas in some individual may not affect another. Beans are not the only sources of flatulence. Some other culprits include artificial sugars Sorbitol and Mannitol, dairy products like milk, cream & ice cream; vegetables like broccoli, corn, cabbage, cauliflowers & green peppers; high fat food like meats, fried foods and gravy; Sauerkraut & onions, grains, high wheat products and starches; fruits like melons, banana, prunes, raisins, apples and bananas.

Medical science even has a procedure called Faecal Transplant that actually saves lives! A certain type of bowel infection caused by unhealthy bacteria called Clostridium difficile causes inflammation of the large intestine, severe diarrhoea and blood sepsis. For chronic cases, doctors use the faecal transplant technique to save the patient.

In April 2012 an Albert Bridge, Nova scotia resident aged 66 years performed this procedure on himself as he had a very severe case of chronic C. difficile infection that he contracted during a surgery 18 months earlier. His doctor postponed his treatment due to a policy issue at his hospital. Hence, he decided to take the matter in his own hands and mixed faeces belonging to his cousin with water and douched himself through the rectum and got the procedure done at the best price available i.e. free!