Bearded dragons have become one of the more popular choices when it comes to pet reptiles, and it’s no surprise why. They are amazing creatures that appeal to both beginners and the more experienced reptile enthusiast, mainly because they are relatively inexpensive and easy to care for. Plus they’re just fun. However, this ever-growing popularity has its downside. Too many people go in not knowing enough about bearded dragons, what it means to own one, or how to take care of them. Like with any pet, buying a bearded dragon is a long-term commitment to care for a living breathing thing. Here are some bearded dragon facts anybody thinking about buying one should know. 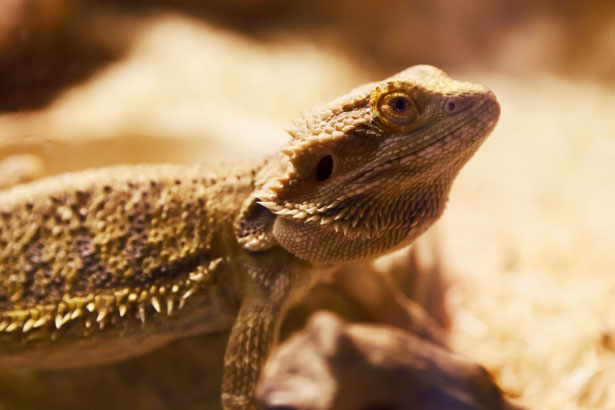 Bearded dragons are native to the deserts and more arid regions of Australia. The most common bearded dragon subspecies that are kept as pets are the central or inland dragon. Almost all pet bearded dragons in the US come from specimens that were illegally smuggled out of the Land Down Under. Because they aren’t native, no bearded dragon should ever be released into the wild.

2. How They Got Their Name

Bearded dragons get their name because they can enlarge their throat when feeling threatened. They do this as a means to frighten predators or other bearded dragons vying for dominance.

There are more choices in bearded dragons than just the two main subspecies. Selective breeding has given us several variations of these species called morphs. This has essentially introduced breeds that have different scale patterns or other physical traits. Of course, the rarer and cooler ones cost more money.

Bearded dragons have a maximum lifespan of about 10 years when kept in healthy conditions. However, this can be as low as 4 years, even in a suitable habitat.

One of the things that have made bearded dragons such a popular pet choice is their good disposition. Beardies are non-aggressive and generally docile. This makes them safe to handle, even for young children. Older bearded dragons can become territorial if another beardie is introduced to their habitat, and attack them as a way to show dominance. Also, a full grown adult bearded dragon isn’t above eating a baby dragon.

Most lizards are able to detach their tails as a way to escape danger and grow a new one. This doesn’t hold true for bearded dragons. If they lose their tail, it is gone for life.

7. You Can Take Them for Walks

Taking a bearded dragon for a walk is a great way to keep them stimulated and get them some exercise. The beardie has to be on a leash held on by a special harness that looks a lot like a vest someone put on backward. Some good places to go are the beach, a local park, or anywhere where pet lizards are welcome. Just remember not to take them out when it’s too cold or hot, and watch for signs of stress. Birds are one of the bearded dragon’s natural predators, and being too close to one can freak it out.

That cute little beardie you see in the pet store doesn’t stay small. Bearded dragons grow fast in the first six months of life, and will reach their full length in about a year. After that, they will stay about the same length, but gain bulk. The maximum length, on average, for the most common bearded dragon breeds is between 18 and 24 inches. Females tend to be smaller, and the beardie’s overall health during its first year of life can affect how big it gets. Keep in mind that bearded dragons need room to play, and will require a larger habitat when they grow.

Some unfounded hysteria is surrounding bearded dragons supposedly spreading germs around, and therefore being dangerous to handle, has made its way around the internet. The truth is that bearded dragons are relatively clean, and are safe to handle for anyone. Also, letting one occasionally roam around a non-carpeted room isn’t going to contaminate it. No one is going to get sick just by touching a beardie. However, as with handling any reptile, always wash your hands or use a good hand sanitizer afterward. There is still a slight risk of salmonella germs being spread this way, but it’s minor. Handling your lizard isn’t any more dangerous than touching the handrail on a public stairway – probably less so.

While a beardie’s diet will have some variation during different ages, (younger dragons eat more protein while older ones eat more vegetation) bearded dragons eat both plants and animals. They are particularly fond of kale, carrots, celery, or spring greens. Mealworms, crickets, and Dubai cockroaches are popular choices. Even though they are omnivorous, bearded dragons prefer live food over plants, so always lean towards live food…