The coconut is loosely defined as a fruit, a nut, and a seed. It’s actually a drupe – a fruit with a fleshy outer part, thin skin and a seed in the middle. Whatever its classification, one thing is certain, the coconut is very versatile. Its many uses are documented throughout history, from medicinal, to nutritional, and cosmetic. Coconut oil is rich in medium-chain fatty acids (MCFA’s), specifically lauric acid, caprylic acid, and capric acid. It has anti-inflammatory, anti-microbial, and anti-viral properties, making coconut oil an excellent addition to your diet. Read on to see six of the powerful benefits coconut oil has to offer. 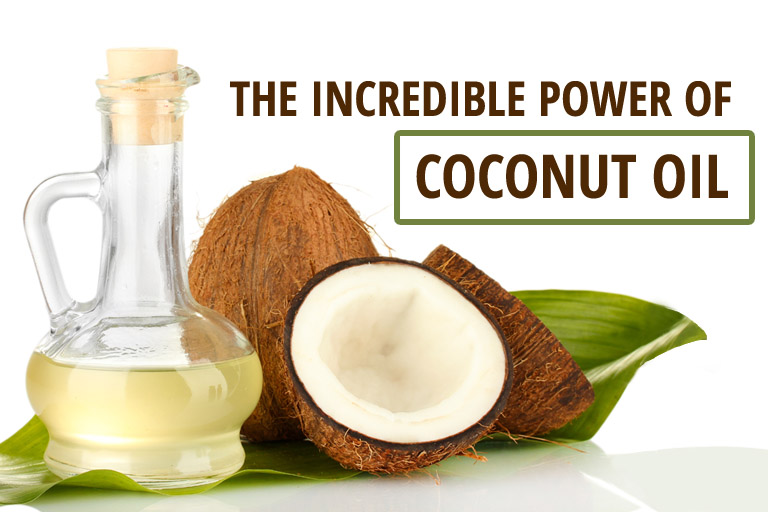 Type II Diabetes occurs when the pancreas is unable to produce insulin, or its cells are unable to absorb it. It is normally the product of diet and lifestyle choices and is more common in adulthood, often called Adult-Onset Diabetes.

Continuing to restrict your refined sugars and refined carbohydrates, while adding coconut oil to your diet can help relieve symptoms of the illness. MCFA’s make up 66% of coconut oil. They are smaller and more readily absorbed than long-chain fatty acids (LCFA’s) like those found in vegetable oils. Feeding your cells coconut oil provides a boost of energy and helps slow down the absorption of sugars, lowering blood glucose levels. It has a low glycemic index (GI) so it will continue to help balance your blood sugar. It acts like glucose in the way the body uses it but doesn’t require insulin to enter and nourish your cells. This gives your pancreas a chance to rest, and in time may again produce insulin.

Coconut oil is especially helpful in reducing visceral fat, that stubborn abdominal fat that wraps around your internal organs. It’s the most dangerous type of fat because it’s linked to heart disease, type II diabetes, cancer, and stroke.

MCFA’s found in coconut oil increase metabolic rates and aid in weight loss through a process called thermogenesis. Thermogenesis is the production of heat. To generate heat your body must burn calories. Coconut oil triggers this process by transporting MCFA’s directly to your liver and quickly using them for energy. Your body burns more calories during thermogenesis and ultimately reduces belly fat.

Alzheimer’s affects more than five million Americans. Your brain cells can’t store energy and need a constant fuel supply normally provided by glucose. The brain cells of Alzheimer’s patients are unable to take in glucose. This causes the cells to weaken and die. The term Type III Diabetes is sometimes used to describe Alzheimer’s because the brain becomes insulin-resistant.

There’s an alternative way to fuel your brain cells. When the brain can’t get enough energy, the liver breaks down stored fat into ketones. Your body produces ketones when it converts fat, instead of glucose, into energy. Coconut oil contains 66% healthy saturated fat (MCFA’s) that is used to produce ketones. The liver releases ketones directly into your bloodstream where they go directly to your brain and instantly fuel your brain cells. Evidence suggests ketones may help restore nerve cells in the brain, even if they’re already damaged.

Dr. Mary Newport, a neonatologist, whose husband suffered from Alzheimer’s, drew attention to treating Alzheimer’s with coconut oil. When her husband’s traditional treatments didn’t help, she noticed a marked improvement using coconut oil and MCFA’s. Her efforts resulted in a clinical study currently underway at the University of South Florida Byrd Alzheimer’s Institute, with results expected in 2017.

Depression is linked to imbalances in the neurotransmitters serotonin, dopamine, and norepinephrine within the brain. Adding coconut oil to your diet and triggering the ketone process can help reduce or relieve symptoms. Neurotransmitters are wrapped with a coating of cholesterol when your body makes ketones. The coating protects them and is important for keeping the lines of communication open to the brain.

When blood vessels become restricted or less flexible, the heart must work harder to pump blood. The result is high blood pressure. If left untreated, it can lead to heart attack and stroke.

While coconut oil is a saturated fat, it helps boosts your overall cholesterol levels by raising your HDL (good cholesterol), likely due to its high lauric acid content. As HDL improves and replaces refined carbohydrates it reduces LDL (bad cholesterol).

When the delicate balance of good bacteria and yeast is altered, the yeast (candida) can take hold and lead to a ‘leaky gut’. A leaky gut allows food particles to enter the bloodstream through the lining of your intestine and cause a host of seemingly unrelated health issues like headaches, fatigue, and food sensitivities.

A natural alternative to prescription anti-fungal treatment is coconut oil. Coconut oil contains caprylic acid, which is very effective at eradicating candida albicans, the most common culprit in yeast overgrowth. The caprylic acid attacks the cell wall causing it to disintegrate. The interior of the cell then shrinks and dies.

Coconut oil has many health benefits. You can incorporate it into your diet by cooking or baking with it, or just eat it raw. To reap its benefits, the recommended amount is 2-3 tbsp daily. Coconut oil may cause stomach upset if you haven’t used it before, so start out slow and work up to the suggested amount.