Upon seeing the iconic image of Big Ben, it’s hard not to think of all things British. It’s understandable, as any film or TV series that is set in London will generally feature a shot of the clock tower. It’s been voted Britain’s most popular tourist attraction and most iconic landmark, and it’s hard not to realise why. The USA has the Statue of Liberty, France has the Eiffel Tower, the Sydney Opera House encapsulates Australia – Great Britain has Big Ben. 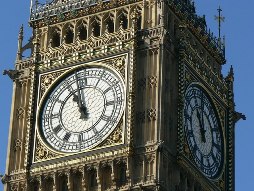 The first thing worth mentioning is the proper name of the clock tower. Whilst commonly known as Big Ben, this is actually the name of the bell that resides within the clock tower. Until 2012 it was known as simply the Clock Tower until it was officially renamed the Elizabeth Tower in honour of Queen Elizabeth’s Diamond Jubilee celebration. The Clock Tower is attached to the Palace of Westminster, which is the home to the UK government, but the entire tower is commonly referred to as Big Ben by most Brits.

It also holds the record for being the second largest four-faced chiming clock in the world, only behind the Minneapolis City Clock. Many parts of Big Ben are over 150 years old, making it one of the oldest and best-maintained clock towers in the world. The bell Big Ben was first cast in 1858, with the clock face being completed in 1859. The first ever chiming from the clock and bell came that same year, on July 11th.


No one is actually sure about the naming of Big Ben. As it is the name for the actually giant bell inside, many have assumed by extension it is the name of the entire tower. There are a few suggestions as to where the name came from, with British heavyweight boxer Benjamin Caunt. Others claim it is more likely to be Benjamin Hall, a civil engineer who oversaw the installation of Big Ben. There is currently no way of ever knowing for sure with the mysterious origin of the name adding to Big Ben’s history.

There are also four nameless quarter bells inside the belfry. They chime every quarter of an hour, playing the world famous Westminster chimes. The chimes could actually be changed, yet it would likely not go well in the eyes of the British public, who have long listened to the famous chime in times of celebration, such as New Year’s Day and the London Olympics.

As you can imagine, the chimes are rather loud. If you were to stand right next to the bells as they chimed, your entire body would vibrate. It can be heard for miles in and around London. Surprisingly, it is actually much quieter inside the Palace of Westminster. Going outside will provide a much louder sound, despite the buildings being attached.

Finally, just who are the owners of Big Ben? Every tax paying citizen of the UK! The building is owned by the citizens of the country it resides in, much like the entire Palace of Westminster. In fact, if you are waiting to take an internal tour of Big Ben, you have to be from the UK. No foreign visitors are permitted inside, so any British citizen who hasn’t seen it yet don’t know how much of an exclusive opportunity they have. Plan in advance though, it isn’t a case of showing up for a tour, you have to arrange it with your local MP and can be fully booked for as much as the next 6 months!