Your iris, the colored part of your eye that surrounds your pupil, is as unique to you as your fingerprint due to its many textures and patterns.  A pigment called melanin is what’s responsible for the color of your eyes.  There are up to 16 different genes involved in determining the amount of melanin in your eyes, so you can imagine the amount of variations in eye color that exist. 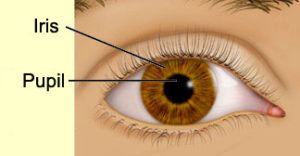 The large amount of melanin in brown eyes can protect you from melanoma cancer because brown eyes are better able to block the sun’s harmful rays.  While that doesn’t mean you can skip the sunglasses, it does mean you’re getting an added layer of protection under those shades.

2. Men With Brown Eyes Are Perceived As More Dominant

A study conducted in Czechoslovakia suggests males with brown eyes are considered more dominant than those with blue eyes.  Scientists suspect it may be due to certain traits associated more with brown-eyed people.  Brown-eyed males are more likely to have square jaws, thick eyebrows and broad cheekbones, traits that are also associated with adulthood, whereas blue eyes are associated with babyhood, so people may perceive those with blue eyes as child-like.

3. Brown Eyes Are the Most Common Eye Color

The theory goes our ancestors all had brown eyes because they lived in warmer climates where greater amounts of melanin were necessary to protect them from the sun.  As humans evolved and migrated into cooler climates with less sunlight, the need for high levels of melanin decreased, giving rise to humans with light colored eyes.  Still today, in some parts of Asia and Africa brown eyes are often the only eye color.

4. Reaction Times Are Faster in People With Brown Eyes

That melanin responsible for giving you those brown eyes also multi-tasks as an insulator for electrical connections within the brain.  The more melanin, like those with brown-eyes, the faster and more efficient your brain can process signals, which may explain why you’re better at baseball or tennis if you have brown eyes.


5. People With Brown Eyes Are More Difficult to Read

The pupil dilates and contracts with changes in your mood.  It’s harder to see those dilations in people with very dark brown eyes, making it difficult to tell how they feel.  For this reason, people with brown eyes are sometimes seen as mysterious.

6. You’re Less Likely to Drink as Much as Your Blue-Eyed Counterparts

People with brown eyes may be more sensitive to the effects of alcohol, and this may prevent them from drinking excessively.

A study conducted by the University of Pittsburgh showed that women with brown eyes didn’t tolerate the pain of childbirth as well as those with blue eyes.  They also had higher levels of anxiety and depression following childbirth.  Scientists believe this is due to the NCX-4 gene that is linked to brown eyes and controls a protein linked to pain receptors.

8. Brown-Eyed People Are Less Likely to Have Hearing Problems

Once again, melanin multi-tasks.  The higher amount of melanin in people with brown eyes protects nerves in the brain from damage caused by noise.  So, if you have brown eyes and work in a loud factory, your coworker with blue eyes might suffer hearing loss while you don’t, even though you’re both exposed to the same working conditions.

All human eyes are actually brown.  The pigment melanin is what makes up the color of the iris.  The color we see is associated with the amount of melanin in the iris and how it reflects light.  Those with lower amounts of melanin absorb less light and reflect more light back out at shorter wavelengths along the blue end of the spectrum, giving the eyes the appearance they are blue.