Have you ever seen a cat fall and land on their back? The vast majority of you will answer ‘No’, because cats pretty much always land on their feet. Has a cat ever rubbed itself up against your leg in delight, its tail fluttering high, or against a wall or a table that it likes in your home? I’m guessing the answer is ‘yes’.

And have you ever seen an angry cat swish its tail about forcefully, before lashing out at something? I’m sure you have.

These three questions and answers sum up the main reasons as to why cats have tails. They are: balance, marking their territory, and communication. 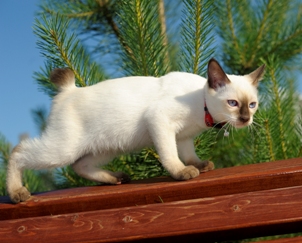 Cats have amazing balance. They can climb easily up the highest of trees, walk over the thinnest of bars, jump from wall to wall landing with grace and poise, and no matter how they fall, they will always land strong on their four dainty paws. It’s effortless to them. It comes so naturally to them because of the amazing feature that is their tail, it’s a wondrous feat of engineering. In delicate movements and challenging jumps, a cats tail acts as a counterweight to its body, when the cat moves left, the tail will go right to balance it.

A cat’s tail is an extension of their spine and contains 10% of their body’s bones. It is made up of an extensive group of muscles, ligaments and tendons that give cats their super agility and mobility. When a cat falls, there is also a fluid in their inner ear that is alerted, and starts to move. The shifting of the fluid causes the head to move to level the fluid. The body then automatically follows suit, so that hey presto the cat is upright again.

Marking their territory
What is a cat doing when it is rubbing itself up against you with its tail held high and a sneaky look in its eye as if to say ‘Come come Mr Bond, you get just as much pleasure from killing as I do’? Well it might not be thinking of killing exactly, but it is certainly got something sinister afoot, maybe more like ‘Come come my sweet, you are all mine now’.

Cat’s tails contain glands, which secrete a scent when they want to mark their territory. When they are rubbing merrily up against you or another desirable object, they are secreting this scent to mark you as theirs. While your dog is happy to acknowledge that you are the boss, your cat is always the king. You will see this tail-rubbing with other things too like lampposts they take a liking too, or your plush new settee! They might also be spraying out urine when they are backed up vertically against something, this also a tool for marking. You’ll soon know when you get the acrid, horrid smell of cat wee.

Communication
Body language is a cat’s main mode of communication and a huge amount is communicated through their tail.

The following list offers explanations for what a cat is communicating, by how its carrying its tail:

Tail held high – A cat strutting about with its tail in the air is a happy cat. It is expressing confidence and contentment. She knows she is the boss around here.

Tail curved like a question mark – This position tells of a friendly cat, greeting you happily and inviting you to play. A cat with a curl in its tail is approachable and inquisitive.

Tail wrapped around something – If your cat is curled up beside you with its tailed wrapped around you, it’s giving you a little hug. This tail position conveys friendship and contentedness. A cat will usually wrap its tail around itself while snoozing comfortably in front of the fire. This cat is not going anywhere anytime soon.

Tail whipping back and forth – This signifies aggression. The cat is angry about something and might be about to attack. Wild cats whip their tail to help give momentum when they are about to pounce on prey. It’s best to stand well back if you see a cat carrying out this tail behavior.

Low straight tail – this can also mean aggression, or at least a very serious mood. Your cat won’t be messed with in this mood.

Tail swishing slowly – You can distinguish this from the tail whipping by the slowness and it is a lot gentler. It’s not aggressive. The cat is likely focusing on something like a toy its about to pounce on, which of course cats are wont to do.

Tail between its legs – This signifies fear and submission, the cat is frightened of something.

Tail held to one side – this can be interpreted as a sexual invitation from a female cat in heat.

Tail puffed up – This is usually accompanied by an arched back and is an attempt by the cat to make itself look bigger to ward off danger. This behaviour means the cat feels frightened and threatened.

Tail sucking – A cat sucking their tail is a bit like a baby sucking its thumb, it’s a comfort thing. But if your cat is sucking its tail relentlessly then it’s a sign that it is anxious. Excessive tail sucking can also cause damage to the tail.

Injury to a cats tail can lead to serious nerve damage. The nerves in a cat’s tail help to control and provide sensation to the tail, hind legs, bladder, intestine and anus, so damage to their tail can be extremely debilitating.

Siamese cats have a slight kink in their tails. One story of how it got the kink is that once a Siamese princess slipped her rings through her cat’s tail to keep them safe while she bathed. In order that the rings didn’t fall off, the cat turned its tail up into a curve to so that it acted as a hook for the rings.

There is of course the Manx cat which hails from the Isle of Man, who doesn’t have a tail at all. It has evolved to cope with the lack of a tail by developing very a strong rounded rear, tall hind legs and a broad chest.

So there you have it. There is a lot more to a cat’s tail than just providing it with a beautiful posture and an elegant gait.

And a word of advice… Never ever step on a cat’s tail.