Northern Ireland has six counties: Antrim, Armagh, Down, Fermanagh, Londonderry and Tyrone. These counties were the principal local government divisions of Northern Ireland from its creation in 1921 going on to 1972 when the governmental features were abolished and replaced with the twenty-six unitary authorities which exist today. These councils have boundaries which may cross existing county borders. 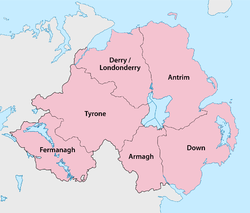 The six counties of Northern Ireland form two-thirds of the historical province of Ulster with the other three counties being Donegal, Cavan and Monaghan.


The six counties still have limited political status with car license plates being assigned identifiers according to the county the car is registered in.

So what about the counties themselves: What are they about?

County Fermanagh covers an area of 1,691km and also accounts for 13.2% of land mass of Northern Ireland. Thirty percent of Fermanagh is covered with lakes and waterways. It has one large town, Enniskillen, one intermediate settlement, three villages and 15 hamlets.

County Londonderry is also known as County Derry and covers an area of 2,074km. It has one city, Londonderry, one large town, one medium town, two small towns, five intermediate settlements, 11 villages and 18 hamlets.