Some kids (and adults) do it, my Dad does it, in the movies the bullies or bad guys used to do it, and certainly the bullies at school usually did it while threatening to beat you up. It sounds incredibly painful, and if it happens all the time you must understand how the sound can become annoying or even make someone cringe.

Scientists at the University of Alberta in Canada may have achieved a first. In a new study published in PLOS ONE on April 15, 2015, an international team of researchers revealed the results of what they call their “Pull My Finger” study, in which they utilized an MRI video to show what happens when you crack your knuckles. Do you crack your knuckles? Did your Mum or your Grandma warn you that cracking your knuckles would cause arthritis? Well, rest easy. 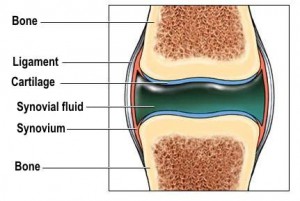 A joint with the synovial fluid inside (source)

In your fingers, your bones are separated at the knuckles with cartilage and a gap, known as the sinovium. The sinovium, or sinovial gap is filled with synovial fluid, which reduces the friction in your joints when you flex or move them. The synovial fluid contains gases, including nitrogen, carbon dioxide and oxygen.

When you crack a knuckle, you are stretching out that space between the bones. This causes the pressure between the bones to decrease and creates negative pressure, like a vacuum, which in turn sucks the hydrogen, nitrogen and carbon dioxide into the synovial fluid and forms little bubbles of these gases. The collapsing of these bubbles creates the cracking or popping noise that you can hear. It takes a short period of time for the gas volumes to build up again in the joint, so it usually takes 20 to 30 minutes before you can crack your knuckles a second time.

It was in 1947 when UK researchers first theorized that a vapour bubble was forming in the joints when knuckles were cracked. That was put into doubt in the 1970’s when another team of scientists proposed collapsing bubbles as the cause of the noise. Finally, though, we have video evidence of the physics of knuckle cracking, thanks to the team from Alberta (Greg Kawchuk, Hongbo Zeng, Richard Thompson, Jacob Jarenko, Jerome Fryer, and Lindsay Rowe). A chiropractor approached Professor Kawchuk to discuss researching a new theory about knuckle cracking, when they decided to forego the research and go straight to the medical department to ask if they could borrow the MRI scanner to actually video what happens.

The video of course needed a subject who could crack his knuckles on demand, but this role was fulfilled easily with the chiropractor himself, who proved so talented at cracking his knuckles they referred to him as the “Wayne Gretzky of knuckle cracking”. Using an elastic tube, Fryer’s fingers were inserted one at a time into the tube and the tube stretched until it had pulled the finger with sufficient pressure to crack the knuckles. The procedure was recorded as each finger’s knuckle was cracked. This has finally put to rest the theorists and confirmed that collapsing gas bubbles is responsible for the noise you make whenever you crack your knuckles – unless you’ve gone a bit too far and actually dislocated the joint or broken a bone! Don’t laugh – various reports in the literature include several injuries from knuckle cracking, including the above as well as over-stretching and even tearing the ligaments.

Scientists estimate the energy released when the gas bubbles collapse is approximately 0.1 mJ per cubic millimetre, which is sufficient to cause damage to hard surfaces, but apparently does not cause damage to either our bones or our cartilage. Why does it seem to feel good? Because the release of the gas bubbles also stimulates the nerve endings in the area, and you have stretched the joint slightly, giving it a bit more space, even if for a short period of time.

While there is no evidence that knuckle cracking causes arthritis, there are reports of other negative impacts, although these tend to be less severe than debilitating arthritis. These include instability in the joint, reduced hand function and loss of grip strength. So if you plan on trying for world records in, say, handshaking or arm wrestling, maybe you shouldn’t crack your knuckles. But if you’re worried about arthritis, don’t be – one doesn’t lead to the other.