It’s a common statement that gets thrown about, that if a dog eats chocolate it could face some serious health problems that can commonly cause death. Now many non-dog owners may not know whether it is an old wives tale or if there is any fact in it. The bad news is that it is actually true, that chocolate can be toxic to a dog if it gets its paws on some, and it could even cause death in severe cases. 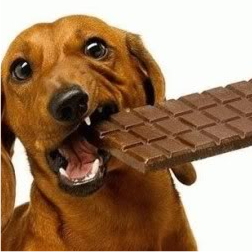 The reason that chocolate is one of many foods dangerous for dogs is due to one of the chemicals found within it – Theobromine. This is perfectly harmless to humans thanks to our digestive system; however, it’s a different story for our four-legged friends. Due to their inability to metabolize it fast enough, it can lead to a toxic build-up.

How dangerous depend on various factors. Firstly the size of the dog has an obvious effect on how serious chocolate consumption can be. Larger dogs can understandably eat larger amounts of chocolate before it becomes lethal, smaller dogs, on the other hand, are far more susceptible to poisoning from eating small amounts.


Secondly, the type of chocolate will determine the severity of the poisoning. This is due to the fact that different types have different levels of theobromine. Milk and white chocolate are far less concentrated in the chemical, so they are not the worse types to have around, meaning a dog can get away with eating more of this. Dark chocolate has far more in it and can be very dangerous if a dog eats it, even if it’s a small amount.

When a large amount of theobromine is consumed by a dog, it can lead to muscle tremors, muscle seizures, and an irregular heartbeat or heart attack and internal bleeding. Smaller amounts may just cause vomiting or diarrhea, but as these symptoms take a while to show, there may be no way of knowing just how much a dog has eaten.

Whether you know how much a dog has eaten or not, the normal procedure is to attempt to induce vomiting within two hours of consumption. If you are unsure of how much it has eaten the best bet is to make a call to the vet to be on the safe side, as they can explain how much chocolate can affect dogs of each size, as well as symptoms to look out for.

Vomiting can be induced by giving the dog hydrogen peroxide. There are several ways to administer this, from using a turkey baster to tricking the dog by mixing it in with some food. Once the dog has vomited, it shouldn’t be given any food or water straight away. It can take some days to properly exit the dog’s system, so it’s important to catch it early to allow as much chance as possible for recovery.

A trip to the vet is the best case scenario if you have found out your dog has eaten some chocolate, or if you can spot the signs that your dog is unwell. Knowing how much they have eaten will go a long way to telling you if you can treat them at home, or if a vet is necessary. Either way, taking them won’t do any harm, so if there is any doubt as to how bad it is, always play it safe – your dog’s health is always the most important thing.

Related: 9 of the worst foods to feed your dog