Belgium’s attacking midfielder and winger, Eden Michael Hazard, was born 7 January 1991 as the son of a former Belgian footballer. The 1.73m / 5ft 8 inch footballer, is known for his speed, creativity, technical ability, and his ability to change a game.

Hazard started his career at the local club Royal Stade Brainois, in La Louviѐre, when he was only four years old. He moved to Tubize at the age of eight, where he remained for two years before transferring to Lille. Eden finished his youth career at Lille and remained there for the first five years of his senior career.

While playing in a local tournament, the talented footballer was spotted by a Lille scout. Hazard’s performance was so impressive that the report given on him, by the scout, led Lille club officials to arrange a meeting with Hazard’s father and offer him a contract. His parents gladly accepted the contract from Lille hoping that their son would be exposed to better training facilities to enhance his growth as a footballer. Eden made his professional debut for Lille, in November 2007, at the age of 16.

Hazard’s seven years spent at Lille were not in vain. He used his time there to gain the necessary experience to kick-start his professional career. In his first full season at Lille, he became the youngest ever scorer in the club’s history. This led him to wining the UNFP Young Player of the year award, becoming the first non-French player to receive this award. In the 2009/10 season, he won the award for the second time and became the first player to win the award twice. He was also named in the league’s team of the year.

The 2009/10 season had Hazard’s performances making him a name all over Europe – he was in demand. Interest was shown by some of England’s finest clubs, Arsenal and Manchester United, along with two of La Ligas biggest clubs, Barcelona and Real Madrid, as well as the Italian club Internazionale. Hazard made the smart decision to remain at Lille and gain more experience which put him in even greater demand.

Football legend, Zinedine Zidane, was quoted as saying, “Eden is technically gifted and very fast. He will be a major star in the future. I would take him to Real Madrid with my eyes closed.” He made this statement when Hazard was only 19 years old. To call that a great compliment would be an understatement.

In the 2010/11 season, Hazard was part of the Lille team that won the league and cup double. He helped Lille to win their first League One title since 1954. His performance had him named as the UNFP Ligue 1 player of the year. He became the youngest player to win this award.

The little man in blue 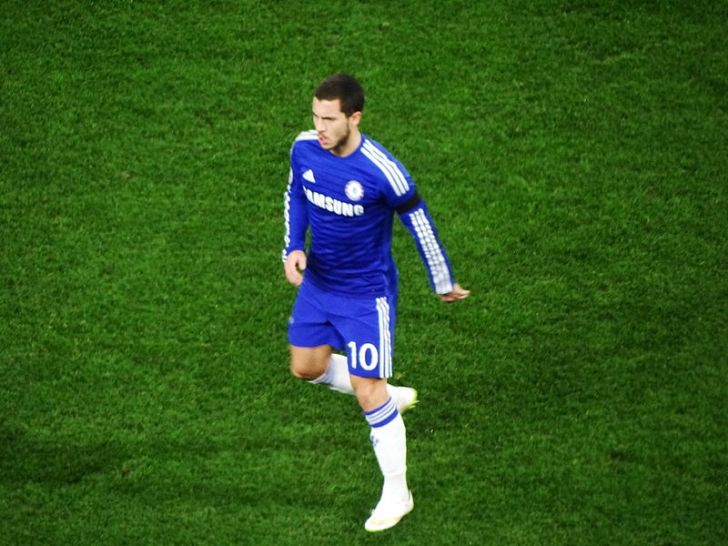 In June 2012, Hazard transferred to Chelsea FC and has since become a major part of their success. In his first season at Stamford Bridge, he saw Chelsea winning the UEFA Europa League. In his second season, he won the PFA Young Player of the year award.

In December 2012, he scored in back-to-back games proving his dedication. One was a 5-1 win against Leeds United in the League Cup. The second was an astonishing 8-0 win against Aston Villa in a league game.

In 2013, he scored a left-footed goal from 25 yards in a 0-4 win against Stoke City. He was, however, sent off the field during a Football League Cup Semi-final second-leg game against Swansea City in January 2013. Hazard was seen kicking a ball out from underneath a ball boy who was trying to waste time by lying on the ball. When returning, after his brief suspension, he scored in a 4-1 home win against Wigan Athletic.

The 21st of February 2013 saw Hazard coming on as a substitute to score a solo goal, during stoppage time, against Sparta Prague. This goal sent Chelsea through to the last 16 on a 2-1 aggregate score. Hazard came off the bench a second time to score an individual goal and provide Ramires with the assist needed to draw against Manchester United in the quarter-finals of the FA Cup.

In March of 2013, Hazard scored a goal against West Ham United and assisted Frank Lampard in scoring his 200th goal for Chelsea. Ironically, Frank transferred to Chelsea from West Ham United. Hazard was named as the Man of the Match.

In May 2013, Hazard once again assisted Lampard in scoring a monumental goal against Aston Villa. This goal enabled Lampard to break Bobby Tambling’s all-time goal scoring record for Chelsea FC.

In the 2013/14 season Hazard was part of the 23-man shortlist of players who were nominated for the FIFA Ballon d’Or, although he didn’t win it.

Hazard was given the number 10 jersey after Juan Mata’s departure to Manchester United early in 2014. Having worn the number 17 shirt, he was thought to be a combination of Messi and Ronaldo (10 and 7). Chelsea manager, Jose Mourinho, agrees by saying, “I keep saying he has to improve. He needs to have his feet on the ground. Ronaldo and Messi are Ronaldo and Messi. Eden Hazard is probably the best young player in the world with legs to go there, but give him time”

Hazard is the only player in Europe who has taken more than 15 penalties and scored all of them. Sadly, he missed his first Pemier League penalty against Crystal Palace, 3 May 2015. He was, however, able to head the ball into the net with a second touch. His goal put Chelsea 16 points clear and won them the 2014/15 Premier League title.

Mourinho declared Hazard as “one of the top three players in the world” as a result of his breathtaking performances throughout the 20014/15 season. His efforts earned him the PFA Player of the Year award, voted for by his peers.

A family of footballers

Eden is the eldest of four footballers born to two former Belgian footballers. His mother, Carine, was a striker for the Belgian Women’s First Division team. She stopped playing when she was three months pregnant with Eden. Hazard was on the field before he was even born. His father, Thierry, played at a semi-professional level as a defensive midfielder for La Louviѐre in the Belgian Second Division. Hazard’s parents are now current sports teachers.

Eden and his brothers were raised in a comfortable environment where they were provided with all that they needed to excel. They even lived “no more than 3 meters” away from a football training ground.

He is married to Natacha Van Honacker who he has been dating since the age of 14. The pair share two sons, Yannis and Leo, who might leave the world speechless if they are to follow in the footsteps of their dad, uncles and grandparents. Now that is a legacy not many people can claim, but is certainly one to be proud of.