Have you ever been perturbed by an issue and you’re pretty sure that no one around you is comfortable either, but you all repress the urge to address it? The issue is very intense, prominent and of great consequence sometimes… like there’s an elephant in the room. This phrase has been popular for quite some time, even though it is currently considered a cliché by most people. It has also metamorphosed through a few stages during this time, and here’s a bit about how it all started. 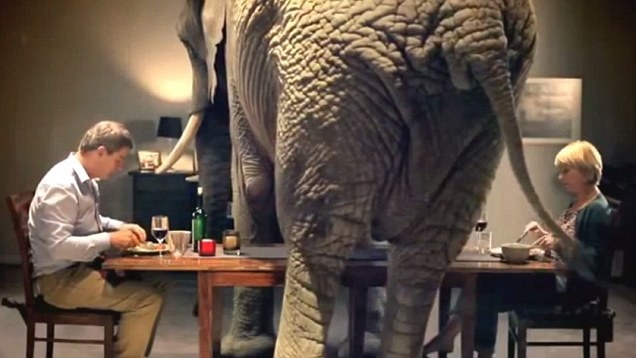 A short fictitious story, written by Ivan Krylov, a 19th-century Russian fabulist, was entitled “The Inquisitive Man” and features a man who visited a museum and noticed a lot of little things but didn’t notice an elephant. The concept was amusing enough to a few authors of that century that they frequently made references to Krylov when mocking a character with poor perception, although they never really mentioned that the elephant was in a room.

In the early 20th century, the phrase began to signify something conspicuous and discordant that just can’t be ignored. One of the popular uses was a simile in the New York Times: “Financing schools has become a problem about equal to having an elephant in the room. It’s so big you just can’t ignore it.”


The meaning of the phrase which is mostly implied today is just an extension of the former; the elephant is now “something conspicuous and discordant that just can’t be ignored” but is ignored nonetheless because it might cause a great deal of (general) embarrassment to mention it. This meaning was first implied in the title of a 1984 book, “An elephant in the living room: a leader’s guide for helping children of alcoholics.” The idiom has generally been used frequently to describe social taboo subjects like foreign religions, LGBTQ+, suicide, or even sex. (For a lot of people, including me, none of those are taboo subjects anymore.)

A considerable number of alterations exist for the phrase, but the only other generally used one is “the elephant in the living room.” Some people enjoy using different large animals in place of ‘elephant’ to convey the message: “the velociraptor in the room,” “the whale in the room” (whales can’t breathe air, of course) and so on. Moreover, it must be emphasized that this idiom shouldn’t be confusingly merged with other similar ones like “800-pound gorilla,” “white elephant” and “pink elephant,” but it’s not uncommon to hear someone say “the 800-pound gorilla in the room.”