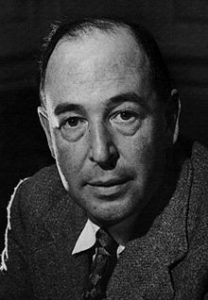 Clive Staples Lewis, who is more commonly known as C.S Lewis was born in Belfast, Northern Ireland on 29 November 1898 and died in Oxford England on 22 November 1963 at the age of 65.  He was one of the intellectual giants of the twentieth century and arguably one of the most influential writers of his day. He was a Fellow and Tutor in English Literature at Oxford University and then in 1954 moved to Cambridge University where he became the Chair of Medieval and Renaissance Literature.

Despite being such a renowned author the death of C.S Lewis was not a much-publicised event because the day he died was also the day that President Kennedy was assassinated and all the news coverage was on him.

C.S Lewis is most famous for his Children’s books “The Chronicles of Narnia” a series of seven novels set in the fictional realm of Narnia which is a fantasy world of magic, mythical beasts, and talking animals. The series tells the stories of various children, from the real world who are magically transported to Narnia in various ways and play central roles in the unfolding of history from Narnia. The children are called upon by Aslan, the Lion to protect Narnia from evil and restore the throne to its rightful line. The books span the entire history of Narnia from its creation in the Magicians Nephew to the eventual destruction in the Last Battle.  The series of books has a largely Christian theme and have influenced children and adults today as well as influencing the writing of many other authors including that of J.K Rowling, (Harry Potter),  Daniel Handler, (A Series of Unfortunate Events) and Eoin Colfer (Artemis Fowl).

The Chronicles of Narnia are so popular they have been translated into more than 30 languages and have sold millions of copies. The series has also been adapted for the stage, TV, radio and films.

However, there is more to C.S Lewis than the Narnia series as he wrote 74 books including several essays collections published after his death.  His first published work was in 1919 and was a collection of poetry entitled “Spirits in Bondage” and continued to publish poetry throughout the 1920s but used the pseudonym Clive Hamilton for these works.

In the 1940’s Lewis wrote mostly non-fiction work which centered on religion and the most notable of these books are “The Case of Christianity”, “Mere Christianity” (which was voted best book of the twentieth century by Christianity Today in 2000), and “The Screwtape Letters”.  He is regarded by many as one of the most influential Christian apologists of his time.

In the 1950’s Lewis returned to writing fiction which is when the “Chronicles of Narnia” series was written.

The books of C.S Lewis still continues to attract a wide readership and in 2008 he was ranked eleventh on their list of “the 50 greatest British writers since 1945”

In 2013, on the 50th anniversary of his death, Lewis joined some of the greatest British writers recognised at Poet’s Corner in Westminster Abbey. There was a dedication service 22 November 2013 which included a reading from The Last Battle by his younger stepson Douglas Gresham and an address was delivered by former Archbishop of Canterbury Rowan Williams.  The inscription on the floor stone is a quotation from an address by Lewis, “I believe in Christianity as I believe that the Sun has risen, not only because I see it but because by it I see everything else”

There are several C.S Lewis societies’ exist around the world where they meet, discuss and appreciate all things inspired and created by the author.

Lewis has also been written as characters into two books, “The Chronicles of the Imaginarium Georaphica” series by James A Owen and “Freud’s Last Session” by Mark St Germain.