The German Shepherd which is also known in Britain as an Alsatian is a dog breed that is well known as the protector or as some would call the police dog. The majority of K9 unit dogs on police forces are German Shepherds, which isn’t really that surprising since the breed’s temperament is watchful, alert, curious, obedient, confident, courageous, intelligent, and loyal, and they make wonderful police dogs as well as dogs for protection in general. In fact, German Shepherds have been known to be used for many different types of work such as disability assistance, search and rescue, military assistance and even acting at times. 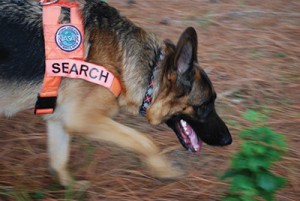 A German Shepherd on a search and rescue mission.

The German Shepherd breed is a medium-to-large working dog that originated in, yep you guessed it, Germany. They generally weigh between 66-88lbs for a male and 49-71lbs for a female and traditionally stand between 24-26 inches for males and 22-24 inches for females. The German Shepherd is typically black, grey, and tan but can vary to include colors such as sable, blue, red, silver, liver, and white depending on the breeding parents and lineage.

As some of the above is pretty common knowledge we want to share with you some more interesting facts about German Shepherds that you may not know already.

Overall, German Shepherds are wonderful dogs. They are hardworking and highly intelligent so if you are looking for a dog that is easy to train and will protect you, this could be the breed for you.