The giraffe is a walking neck to most people’s eyes. It’s like a majestic long-necked horse that just wants to munch on some leaves in the canopies of trees. As the world’s tallest animal, giraffes can grow as high as 19 feet and weigh up to 2,800 lbs. They are the all-seeing mammal who pokes above the treetops. 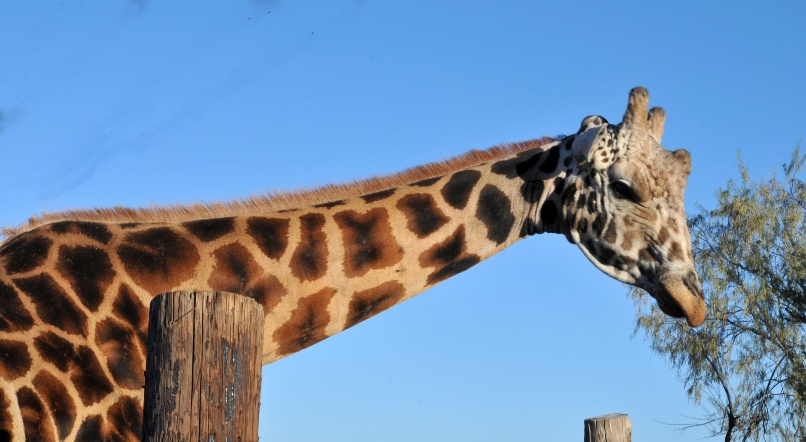 Although, the giraffe isn’t the only animal to inherent long neck bones. Its distant relatives, both extinct and living, have signs of elongated necks. Therefore, the most recognizable trait of modern giraffes is not the most defining feature of the family.

The Canthumeryx was an ancestor of the giraffe 16 million years ago that branched off into today’s okapi, whom grew shorter necks, and the modern giraffe whom kept growing longer. Archeologists have analyzed various giraffe species’ fossil records and realized that these neck bones showed a pattern of the higher vertebrae elongating first, followed by the ones further back much later.

Scientists are still puzzled as to what the definite cause is for this evolution that gave us the modern, long-neck giraffes we have today.

It is a fact that giraffes enjoy a wider range of plants, thanks to their ability to reach leaves that other vegetarians cannot get to. It is a curious advantage, though, since other species, like goats, can also reach food in treetops by sheer dexterity. From an evolutionary standpoint, the ability to reach leaves that are higher up doesn’t appear to be the strongest argument. There are other theories, however.

One of them that has a lot of support is that giraffes evolved a long neck out of mating preferences. Female giraffes choose the males who have the longest necks, whom also compete with other males via epic neck-thrashing battles to determine the winner.

When males go to battle, they will swing their necks into each other until essentially fatigue sets in. It’s not common for any real damage to occur, since their necks are fairly robust. A longer neck provides more reach and momentum when it comes to swinging motions.

A giraffe needs to spread their legs out and bend in a precarious position in order to reach low enough to drink. This means that any split-decisions will be delayed by a dangerous amount of time, far too much to escape the path of a striking crocodile.

The reason is not just because there is a limit to how much a giraffe’s neck can bend, but also because, relative to their bodies, their neck is actually shorter than other species. This is a fairly bad disadvantage for any species to have, but giraffes certainly do well for their size. They are one of the more resilient animals in the African Serengeti.