As time progresses many questions about the Earth and the environment around us are answered using science. However, many events such as evolution and the Big Bang theory are scientifically possible, yet cannot be proven to have actually occurred. The creation of Arizona’s Grand Canyon is one of this phenomenon. At over 270 miles long, and 18 miles wide, this unique natural structure pulls in an average of 5 million visitors per year.

Scientists have concluded that certain layers of rock from the canyon date back to Precambrian times, about 4.6 billion years ago. This was a time in the past where the only organisms to exist were microscopic bacteria. 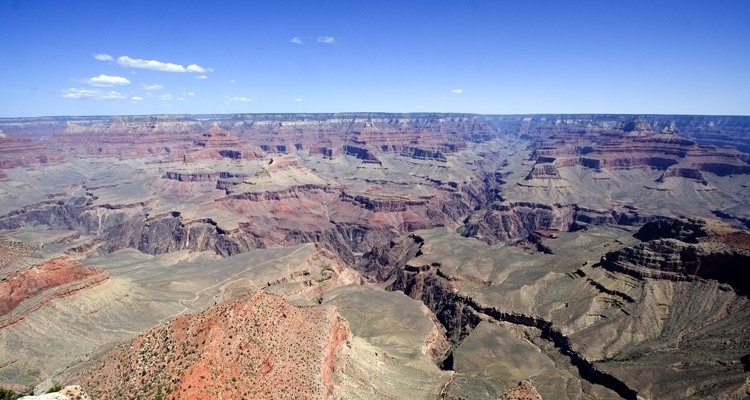 Evidence of human interaction with the canyon can be traced back to about 13,000 years ago, during the Earth’s last ice age. Before the “new world” discovery of the Grand Canyon, Native American tribes such as the Havasupai and Hopis constructed trails that led into the inner canyon.

It wasn’t until between 1510 and 1554 were discoveries of the Grand Canyon documented. Spaniards in search for the gold and riches of El Dorado accidentally stumbled upon the Grand Canyon while on their expedition. For hundreds of years, nothing but blank space stood in place for the “The Great Unknown” on maps.

In 1857, the US Federal Government funded the exploration of this secretive canyon. Joseph Christmas Ives of the U.S Army Corps was chosen for this outing. He set out on the Colorado River with a steamboat he called Explorer. It was far from a smooth trip for Ives, as before even entering the canyon, his boat crashed below the Black Canyon. Once finally making it into the canyon afoot, Ives recorded scenery of unique beauty. He described the natural carvings of the walls. He seemed to be in awe with the natural beauty he had discovered.

The Grand Canyon’s cryptic carvings have caused the conception of many theories in relation to the shaping of this majestic structure. The two most used theories are very similar but differ in the amount of time in which it took for the Grand Canyon to form.

Certain scientists, known as Creationists, believe the Grand Canyon was created in a rapid amount of time due to a single, or multiple acts of natural disasters. Other scientists claim the formation of the Grand Canyon took millions of years to create.

For those siding with rapid creation, it is thought that pressure from flash floods could have created the unique structure that the canyon now holds. When making this assumption, Creationists look at the Mt. St. Helen’s eruption as proof. Right after the eruption, ice from the mountain melted creating a flash flood. The side of the mountain then developed a channel in which rushing water instantly carved out 300 feet out of the side of the mountain.

The other theory suggests that all the work was done by the Colorado River. Before the building of Glen Canyon Dam, the Colorado River was known to be a little more vicious than it is today. Large boulders and other erosions from the fast running waters are thought to have been the main causes for such a canyon.

Apart from the Grand Canyon’s mysterious creation, it also keeps secrets from within. Located at the North Rim of the Grand Canyon is an area of volcanoes known as the Uinkaret Volcanic field. The distance of this volcanic field covers about 600 square miles. In the past, these cinder cones were active, thus causing lava to flow down into the canyon. As lava flowed and began to dry, natural damns were created and blocked the Colorado River’s current just like a dam. Many of these damns created lakes. One of these naturally created lakes was up to 2,000 feet deep.

Over time, the Colorado River was able to break through some of these blockades and continue on its natural path. The most recognized cinder cone in the volcanic field is named Vulcan’s Throne. Imprinted drapes of hardening lava all over the Grand Canyon’s walls are reminders of how active this cinder cone was about 1,000 years ago. The formation of these cones and draping’s occurred within the last two million years. Within those two million years, over 150 lava flows have run through the Grand Canyon.

Also hidden within the beauty of the Grand Canton are around one thousand caves and less than 500 of those have actually been explored and documented. Due to the little information known about these caves, the majority of them are closed off to the public and only those with research purposes are allowed to enter and explore them. Caves within the canyon offer the perfect climates for fossil and artifact preservation. Cool temperatures deep within the caves make it an ideal place for Pleistocene and Holocene remains. However, none of these fossils belong to dinosaurs.

Since early documentation of the Grand Canyon, reports of the Havasupai tribe living within the canyon have been reported. Even today, the tribe still resides in its original location. Their village, Supai, is located within Havasu Canyon. There are no trails leading to their reservation. Guests must fly in via helicopter or use horses to go off course. The reservation is well known for having crystal blue waters and waterfalls. 639 Havasupai still inhabit the Havasu canyon with a median age of 24 years old. It is easy to tell that the Havasupai people will continue living on their land for many more years to come.