“Hemp”, a derivative of the cannabis or marijuana plant has been around for thousands of years and known to man for its medicinal properties. However, it is only now that mainstream medical organisations are taking an interest in Hemp Seed Oil commercially. In many countries, including the UK, cannabis is still an illegal drug and to those who know no better “hemp” is a dirty word. However, “hemp oil” is from the flower of the plant – not the leaf part that you can smoke.

What makes this plant so special is that it is so versatile and can be used for topical applications as well as being ingested and even vaped. By a process of washing, pressing and reduction, it is even possible to produce “hemp oil” at home or buy online from most reputable health-food stores. It can be bought in varying strengths from 1% right up to as much as 30%, which relates to the percentage of pure CBD, or Cannabinoids found in the resulting hemp oil, with CBD being the active ingredient. Commercially, available hemp oil contains none of the illegal hallucinatory THCs that make you “high”. 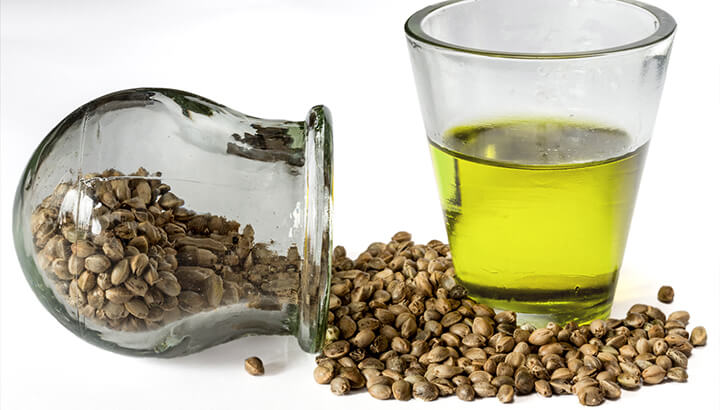 Hemp oil is truly a ‘superfood’! It contains amino acids, fatty acids, and globule edestin. It has anti-oxidant and anti-inflammatory properties and is easily digested. Listed below are just some of hemp oil’s health benefits.

By far the mostcontroversial claims to date have been that hemp oil can potentially be used to cure certain types of cancer. It has been claimed to have cured many people with all types of cancer from skin cancers, brain tumours, breast and prostate cancers.

There is still much research to be done into this but even Cancer Research UK acknowledge that they “have funded research into cannabinoids in the past and if any future cannabinoid research proposals meet” their “high research standards then there is no reason why they would not be funded” but that, as yet, their “lab research conducted into cannabinoids have not been conclusive enough to say that they can effectively treat cancer patients at the moment”.

The debate continues but, having had personal experience of the effects of using hemp oil balm on an external cancer, I can categorically state that it worked and significantly reduced the spread of the cancer cells.

As a food supplement, hemp oil contains a complete source of protein and is ideal for use by vegans and vegetarians. However what you might not know is that is it also a great lubricant and when mixed with lemon oil makes a fantastic varnish for wood!

With all of its wonderful healing properties, hemp truly is one of Mother Earth’s greatest gifts to mankind. As always, make sure you inform your doctor before taking this.