It’s probably fair to say that any woman’s wardrobe simply wouldn’t be complete without a pair of striking killer heels. From kitten heel slip-ons, sensible court shoes, and sensational summer wedges, women today really are spoilt for choice when it comes to footwear. 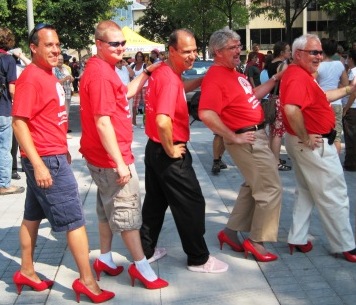 Heels have been a part of fashion for many centuries but surprisingly enough, these elegant shoes which give extra height and posture were not solely reserved for women. Dukes and Monarchs alike (Louis XIV in particular) were well known for their extravagant shoes with elaborate decorations sometimes depicting scenes of battle. Back in those days, many shoes that were custom designed for Louis XIV boasted a heel of anywhere up to ten inches!

While heels are predominantly reserved for women, there have been occasions throughout history where they have featured heavily as a practical and fashion element for men. Let’s take the Romans for example;  both men and women wore sandals with a platform heel, known as Cothurns, in an attempt to raise the wearer above the mud and rubbish in the streets. Cowboy boots were first developed as an attempt to stop the foot sliding through stirrups while on horseback, and of course, who could forget the highly popular platform shoes worn by both men and women during the 1970’s.

Originally reserved for the aristocracy, heeled shoes soon filtered down the rungs of society and became acceptable footwear for all. The heel itself became less of a practical necessity and developed into what we see and wear today however, the sight of a man gracefully strutting down the high street in six inch stilettos is somewhat of a rarity nowadays.