The Eiffel Tower isn’t just a beautiful backdrop for romantic photos and second honeymoons. It has certainly become that over the years, but it started out as the entrance to the World’s Fair in 1889 and was supposed to be torn down shortly after, yet it remains standing tall as one of the most iconic structures in the world.

How did this happen? And where did it come from?

To know the whole story, you have to start back in 1884 when ideas and sketches started to be shared among a number of architects and designers who wanted the prestige of having designed the centerpiece for the 1889 World’s Fair in Paris. The event was an opportunity to celebrate the 100th anniversary of the French Revolution. Engineers working at Compagnie des Établissements Eiffel came up with the original design and added the necessary embellishments after that and ultimately received their boss’s support on the plans.

The site for the Eiffel Tower was decided upon in January 1887 and when the contract was signed, the company received 1.5 million francs for construction.

As the plans and ideas began to grow in Paris, a number of artists in the area began to protest the entire project. This group publicly and emphatically stated that the Eiffel Tower would be, in essence, an eyesore in the beautiful city of Paris. They believed that all the work that the local artists were doing would be eroded under the shadow of something so “useless” and “monstrous”.

It is worth noting that many (but not all) of these artists changed their mind once the Eiffel Tower was built and they could witness the structure in all of its glory.

Shortly after the site was decided upon in January of 1887, construction began and the ironwork was begun in July of that year. Construction continued and was ultimately completed in March of 1889 with the exception of lifts that could carry people to the top. Those would not be finished and ready for service until near the end of May. 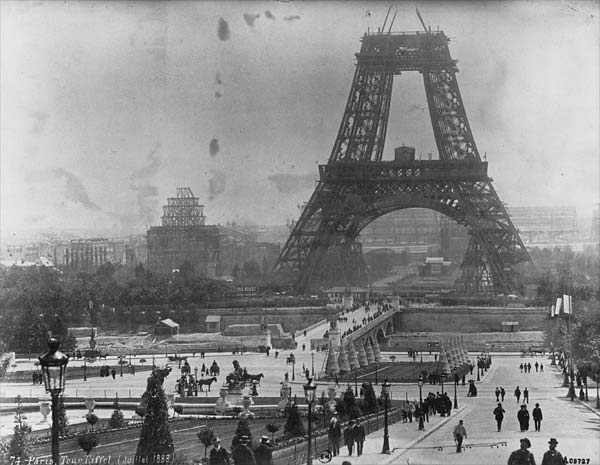 The Eiffel Tower during construction in July 1888

The World’s Fair opened up on May 6, 1889. The tower was opened to the public nine days later and since the lifts were not complete, interested sightseers wanted to see the view from the top and made the trip up on foot which was over 1,700 steps.

The Eiffel Tower was originally intended to be a temporary structure and in the early 1900s, discussions ensued regarding how to tear down the tower and what to do with all the materials. Alexandre-Gustave Eiffel, who owned the firm that was responsible for the construction, personally put up 80 percent of the funds required to build the Tower because the 1.5 million francs would not cover the costs associated with the project. Because of this, the tower was kept in tact for 20 years so that he could get his investment back through tourist and sightseer revenue.

When this 20-year period ended, the Tower became the property of the Parisian government which was planning to deconstruct the structure and scrap the materials. However, Eiffel wanted it to remain where it stood and in an attempt to make the Tower more utilitarian and therefore more useful to the city of Paris, Eiffel had an antennae erected at the top. Because of this benefit to the French military, the initial 20-year period was extended and that use of the Eiffel Tower continues today.

The Eiffel Tower was the tallest structure in the world until the Chrysler Building was completed in 1930 in New York City. When it first came into existence, its purpose was to welcome visitors to the 1889 World’s Fair as an engineering and structural feat that rivaled all other structures that had come before it.

Made of 7,000 metric tons of puddling iron and not steel like many people believe, the Eiffel Tower stands over 1,000 feet and has undergone a number of functions. In addition to being a radio tower, it has also served as the world’s largest billboard by advertising at night for a French automobile company called Citroën. It has been painted yellow and reddish brown in the past and it was vehemently opposed when it was first being constructed by local artists.

Even though the Eiffel Tower was conceived as a temporary structure and came very close to being torn down, it stands today as a symbol of love and romance in the most romantic city in the world.