The Paper Towel is one of the most popular household inventions. Due to its multi-purpose functionality, from cleaning surfaces and spills, wiping windows and drying hands, this absorbent towel has become a family favourite and you’ll probably find one in almost every kitchen. So how did this invention come into our hands? 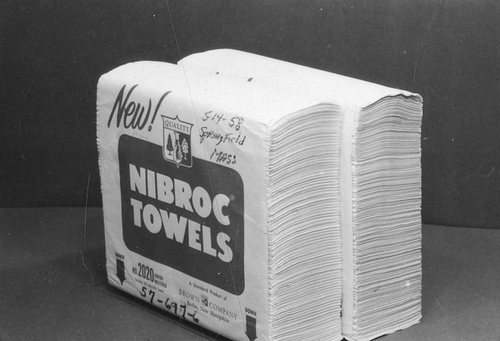 The Scott Brothers, Clarence, and Irvin had opened up their paper company in 1879 but it wasn’t until 1907 that they had created the paper towel. Their invention was entirely accidental because the paper towels were first used for medical use, particularly in hospitals as toilet paper. In 1907, the then head of the company, Arthur Scott, landed in trouble after being told an entire railroad car of toilet tissue paper was rendered useless because the tissue was too thick.  However, it wasn’t until a cold outbreak in a school in Philadelphia that the item was mass produced. Schools had previously used cloth towels in their restrooms which led to the spread of the cold. Scott suggested using their paper towels, and each student used a sheet to dry their hands to prevent contamination. The towels were then sized down before they were sold for public use in railway stations, restaurants, and hotels.

By 1931, the paper towel became immensely popular and was sold in supermarkets as the hottest item to have in your kitchen. They were loved for their convenience, they were disposable and did the same job a normal cloth did.

The towel is made from virgin or recycled paper pulp and is sometimes bleached to give its signature white colour. In the early days, the paper towel was simply a perforated white sheet, today paper towels can come with a variety of designs of them such as flowers and teddy bears. Resin sizing is used to increase the wet strength of the towel, allowing for more absorption of wet substances. They can be sold in stacks or in rolls.