Have you ever been inside of an IKEA store, and found yourself becoming hopelessly lost? You are not alone!

According to an expert on the store design, the stores do actually have a maze-like layout which is used as a psychological weapon against its customers to grab more cash from them. Why and how? 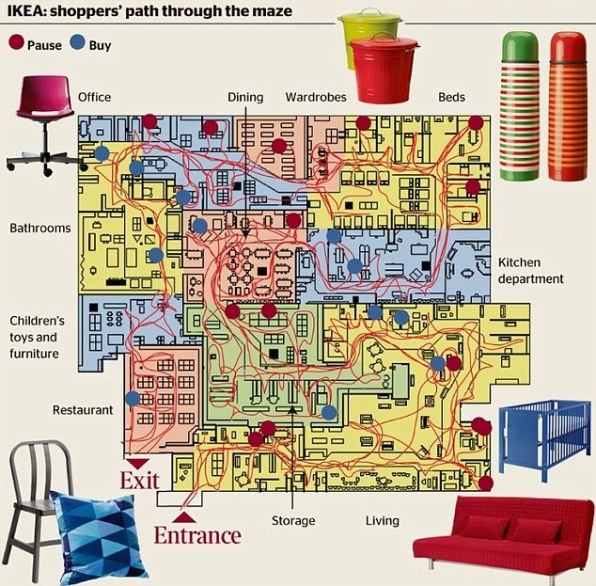 A route that a customer once took through one of IKEA’s stores.

IKEA’s theory is that whilst customers follow a zigzag path between displays, a hopefully disorientated customer feels compelled to grab things from the shelves as a few extra impulse purchases. Even though the stores have short-cuts to meet specific fire regulations, customers find these exits hard to spot as they navigate their way around the maze-like aisles and displays of flat-pack furniture. Therefore, ultimately, IKEA’s number one priority is to try and keep their customers inside for as long as they can.

Alan Penn, director of the Virtual Reality Centre for the Built Environment at the University College London, had to say: ‘You are directed through IKEA’s marketplace area where a staggering amount of purchases are impulse buys; things like light bulbs or a cheap casserole dish that you weren’t planning on getting’, and ‘Here the trick is that because the lay-out is so confusing you know you won’t be able to go back and get it later, so you pop it in your trolley as you go past’.