In the year 1977, a year when most people were focused on the surprising death of rock-and-roll legend Elvis Presley at the age of 42, a man in Ohio remembered this year for a much more different reason.

A 37-year-old man named Jerry Ehman was a voluntary researcher for Ohio State University’s now-defunct Big Ear radio observatory. It was here that a giant telescope was scanning the skies on August 15. In those days, any information was processed through an IBM 1130 mainframe computer, printed onto some perforated paper, and then examined by hand. It was by doing this that Ehman spotted something extraordinary – a vertical column with the alphanumerical sequence: ‘6EQUJ5’. Ehman grabbed a red pen and circled the sequence. In the margin, he simply wrote ‘Wow!’ 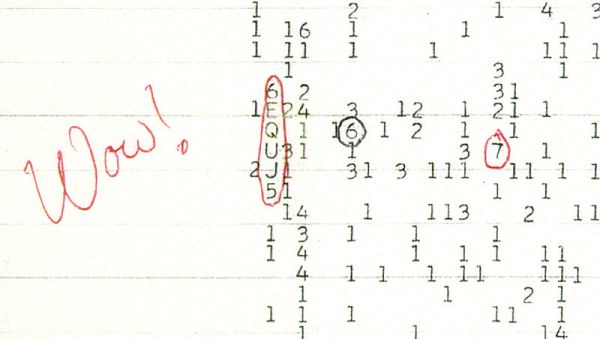 More than three decades later, the Wow Signal is still the first and best potential evidence of communication with extra-terrestrials and it also remains one of the biggest mysteries in science. Over the years, Ehman and his colleagues have worked to rule out potential candidates of what the signal could’ve been sent from – such as satellites, aircrafts or ground-based transmitters on Earth. Although this is the case, it still hasn’t been proved the signal came from ‘aliens’.

The Wow Signal is one big open question.