Are sheep too smart for their own good, or are they just plain dumb? We’ll let you be the judge of that after you have read this bizarre yet slightly fascinating story.

As Turkish shepherds watched on whilst their herd of sheep grazed, one sheep decided that it had enough of the world and jumped to its death. It doesn’t stop there though… 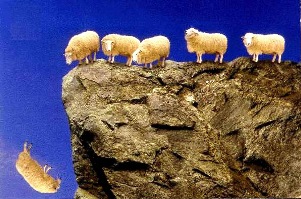 As the stunned Turkish shepherds looked on, their herd of sheep one by one followed the initial sheep’s actions and jumped to their death as well – a nearly whopping 1,500 of them!

It was reported that in the end, 450 sheep died after the mass suicide jump.

They were able to save quite a few as those who jumped later were saved as the pile of sheep got higher, therefore the pile became more cushioned.

Unfortunately, this mass suicide of sheep had an estimated loss to families of $100,000 – a very significant amount of money as the average GDP per head is around the figure of $2,700