Yes, believe it or not, but this is a true story! It was reported that a man from northern China who recently divorced his wife, sued her for being ugly, and won! Winning a total of 750,000 Yuan ($120,000) in compensation – but why?

After the birth of the couple’s daughter, the man accused his wife of cheating on him as he was shocked at their newborn babies appearance, stating that the baby did not look like either of her parents, and how “incredibly ugly” she looked.

A DNA test was carried out to prove to the husband that his wife was not unfaithful to him, and he was the actual father of the child. The wife then admitted that she spent 620,000 Yuan ($100,000), to undergo intensive plastic surgery to change her overall appearance before she met her husband, which she failed to tell him up until the time of the DNA test. 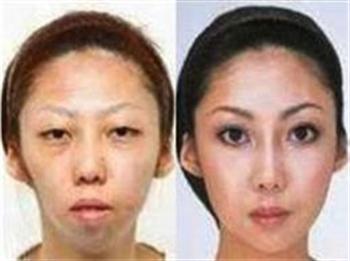 Jian Feng’s Chinese wife – Before (L) and after (R) her plastic surgery.

The husband filed a lawsuit on the fact that the woman had actually convinced him to marry her under false pretenses. The court agreed and ruled that the woman should compensate her “cheated” ex-husband.