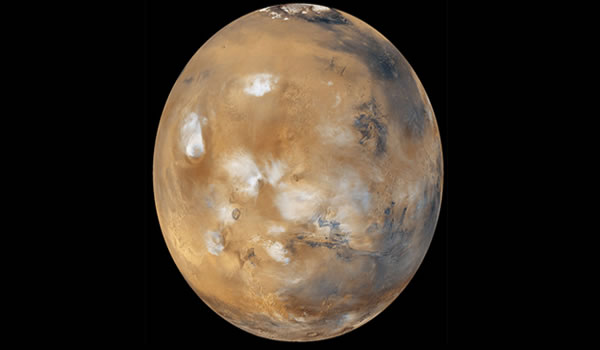 Mars was formed around 4.5 billion years ago and is the fourth planet from the sun, but only the second smallest planet in our entire solar system.

It was discovered in 1609 by Galileo Galilee, the first person to see Mars through a telescope. It was named after the Roman God of War and has the nickname the “Red Planet”. These are just a few interesting facts about Mars, but there is a lot more to learn and it grows by the day.

We’re putting on our astronomy hat to share with you 15 facts about this amazing planet:

Can we have some more facts about Mars, we hear you say? Sure… here’s another ten to feast your eyes upon 🙂

Like Earth, Mars is not a perfect sphere. In fact it bulges slightly around its equator making it 6794 km in diameter but from pole to pole it is smaller at 6752 km.

The Universe is home to many terrestrial bodies which are comprised of mountainous regions and surfaces but Mars holds the record for the highest mountain discovered in the solar system: Olympus Mons, which is an estimated 27 km in height (that’s about 3 times the height of Mt Everest in Nepal), and is located in the Tharsis Montes region and is an extinct shield volcano. Unlike tectonic activity on Earth where plates are in constant motion, on Mars these remain stationary which causes a pile up of lava in one location and the result is one very large volcano.

When asteroids, comets, or particles of natural space debris collide with Mars, fragments of Martian rock can become separated and fall to Earth, pulled in by the Earth’s gravitational field. Martian meteorites can vary in size and often go unnoticed. Sometimes, however, the pieces of rock are large enough to be analysed and so far an estimated 124 meteorites have been identified as having a Martian origin. These meteorites have been found throughout the surface of the Earth such as France, Libya, and the United States of America and some have even been discovered in Antarctica.

Unlike Earth, Mars’ atmosphere is comprised of mainly Carbon Dioxide (over 95%).  It also comprises of nitrogen, argon, oxygen, water vapour and nitric oxide.  The acceleration of free fall due to gravity on Mars is 3.68 m/s², roughly a third of the value it is on Earth, at 9.81 m/s².  This means that if you were to jump on Mars, you would reach three times the height you would on Earth.  Due to the composition and lack of density of Mars’ atmosphere, advanced forms of life are highly unlikely to be able to sustain themselves on such barren terrain.

Ice on the Red Plant

Most of the water on Mars today exists as ice. Mars is a polar planet, meaning it has two poles: one at the top of the planet and one at the bottom. At each location polar ice can be found all year round and during the planet’s winter months, the expanse of ice increases in size. On average, the ice at the south pole could be up to 8 km thick. The ice found in these regions is primarily water ice but scientists have discovered a huge expanse of ice which lies between the Martian equator and north pole just underneath the surface. It is thought to be approximately the area of the states of California and Texas and a result of snowfall that fell millions of years ago.

Research has shown that Mars has channel markings across its surface that are most likely old river beds from the ancient past. Compared to when these channels would have been flowing with water, there is not nearly as much water on Mars today and the water that can be found on the planet is in summer where ice melt allows the water to flow.

The atmosphere plays a vital part in the volume of water on Mars. The atmosphere used to be much thicker and would prevent the moisture from evaporating, leading to surface water, but because the atmosphere has thinned considerably and the gravitational pull is less, the water escapes. It is thought that there could be large reserves of water beneath the surface of Mars but it may be years before scientists are able to confirm this theory.

Mars’ orbit lasts 687 Earth days, and is, on average, 228 million km from the sun.  The tilt of Mars is roughly 25.19 degrees; a similar angle to Earth’s. This means Mars experiences comparable seasonal weather to Earth, however due to the length of a Martian year, these seasons last considerably longer. Due to Mars’ orbit not being perfectly circular, its distance from the Sun has a variation of around 42.6 million km, and its distance from Earth has a variation of around 49 million km, due to differing orbital positions.

Over a 50-year period, numerous rovers have been sent to Mars.  Two failed attempts occurred in 1971 from the Soviet Space Programme, with 5 more sent by US and EU Space Programmes.  Sojourner, Spirit, Opportunity and Curiosity have been sent by the USA, and Beagle 2 was sent by the European Space Agency, with Opportunity and Curiosity the only two remaining functional rovers.  Covering varying distances between 0.1 and 40.25 km, each rover was sent to collect information about the surface composition and climate of Mars, as well as determining if life was ever present on the planet.

Mars has two moons, named Phobos and Deimos, both discovered in 1877 by American astronomer Asaph Hall. Phobos has a diameter of roughly 22 km, orbiting at a distance of 9376 km from Mars, and Deimos has a diameter of around 12 km, at a distance of 23463.2 km from Mars.  The two moons are named after characters from Greek mythology of the same name, with Phobos representing panic and fear, and Deimos representing terror and dread.  It is theorised that a dust ring exists between these two moons, and many smaller satellites of Mars may also exist.

Within the solar system Mars experiences some of the wildest dust storms which can cover the entire planet in a blanket of dust – so much so that surface features are not visible through telescopes from Earth. These storms mustn’t be confused with wind speeds which, at their strongest, only reach up to approximately 60 miles per hour. Compared to some hurricane category winds on Earth, this is only about one third of the strength.