John Lennon was one of the most iconic artists in history to date. He was born in Liverpool in 1940. Like the other three Beatles members, Lennon grew up in a working-class family, where unfortunately, his parents separated when he was young, so he went to live with his Aunt Mimi. His mother Julia frequently visited him and encouraged Lennon to play the banjo, and later the guitar. Sadly, Julia died in a tragic car accident when Lennon was just 17. Her death was one of the most traumatic events in Lennon’s life.

He attended Quarry Bank High School where he formed his first band, ‘The Quarrymen’ which later changed to ‘The Beatles’. By the mid 1960’s, The Beatles were the biggest band in the world. Their career peaked in 1967 with the release of Sgt Peppers Lonely Hearts Club Band, which Rolling Stone states, “is the most important rock & roll album ever made”.

Unfortunately the same year, their manager Brian Epstein died of a drug overdose. Relations with the Beatles started to strain, so in 1970 they split.

Lennon was now married to Yoko Ono whom he continued to record music with. Their aim was spreading a message of world peace and they did this by a series of “bed-ins”. The first bed-in was in 1969. 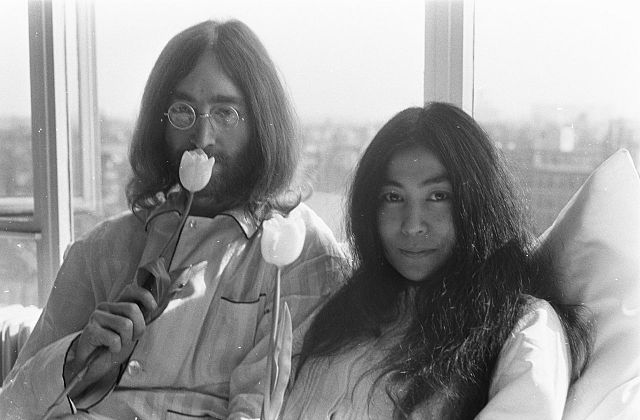 Lennon released many incredible albums including ‘Imagine’ and ‘Mind Games’. In 1975 he took a 5 year break to raise his newborn son Sean, and returned in 1980 with the release of his new album ‘Double Fantasy’ which reached number one in many countries worldwide. Sadly, on the 8th of December 1980, as Lennon was returning to his New York apartment he was murdered. His body was cremated and Yoko Ono scattered his ashes. At the time of writing, his assassin still remains in prison.


Here are a few more interesting facts about the ‘Working Class Hero’ himself..

Lennon was a huge animal lover

You could say he was a bit of a crazy cat lady owning a total of 16 cats during his life. As a child he owned a cat named Elvis, who later turned out to be a boy when he gave birth. He also owned a cat named Jesus during the “the Beatles are bigger than Jesus” controversy but surprisingly he wasn’t the only one as Paul McCartney also had three cats named Jesus, Mary and Joseph.

She often hoped that he would get bored with his music. She famously said, “The guitar’s all right John, but you’ll never make a living out of it”. Oh boy, was she wrong!

Lennon first tried LSD in the home of his dentist John Riley.

John and Cynthia Lennon, George Harrison and Pattie Boyd were invited to a dinner party at John Riley’s house. Shortly after their meal was finished he served them coffee that contained LSD.
“He laid it on George, me and our wives without telling us at a dinner party at his house”. – John, 1970

“My first shag was in Hamburg – with Paul and John and Pete Best all watching/ We were in bunk beds. They couldn’t really see anything because I was under the covers, but after I’d finished, they all applauded and cheered. At least they kept quiet while I was doing it.” Harrison says.

Lennon bought this island off the coast of Ireland for £1700 and it became a place of peace for him. After his death Yoko sold the island for almost £30,000 before donating all the money to an Irish orphanage.

In 1980, Lennon signed a copy of his newest album ‘Double Fantasy’ for Mark Chapman just hours before he shot him to death.