It is quite rare for a modern structure to quickly assert itself as one of the most prominent landmarks of a country – but that’s just what the London Eye has done. Considering it was constructed less than 20 years ago for the turn of the new millennium, it’s a surprise that it has quickly become one of the most iconic landmarks in the entire UK.

Modern TV programmes and films that are based in London will often feature a glimpse of Europe’s largest Ferris wheel. Not only that, but it’s a hot spot tourist attraction, and is, in fact, the most popular paid tourist attraction in the entire UK, with over 3.5 million visitors each year. Taking into account just how many rich and cultured tourist attractions that are spread the length and breadth of the British Isles, it is quite an impressive feat.

The London Eye was commonly referred to as the Millennium Wheel when it first opened, as it was at the turn of the year 2000, and built as part of the celebrations for the new millennium. It has since featured many sponsored names, yet most Brits know it simply as the London Eye. Due to technical difficulties, it actually took until March 2000 to open as opposed to the planned date at the turn of the New Year.


The Ferris wheel is made up of 32 pods that represent the 32 boroughs of the city of London. Each pod can hold 25 passengers (so the Wheel can hold a total of 800), who can enjoy a 30 minute round journey as the London Eye makes it’s rotation and passengers have space to walk around or sit down in these spacious pods. Interestingly, there is no ‘13th’ pod, meaning that the numbered pods actually go up to 33. This is for people who have Triskaidekaphobia – a fear of the number 13.

The structure of the wheel is unique when compared to other Ferris wheels of greater or similar sizes. This is due to the fact that the wheel is supported by a single A-frame on one side. The frame weighs an impressive 300 tonnes, which is understandable when you think that it needs to hold a massive rotating wheel. It actually means that this type of structure is technically a cantilevered observation wheel and the tallest of its kind – although most people simply refer to it as a Ferris wheel. 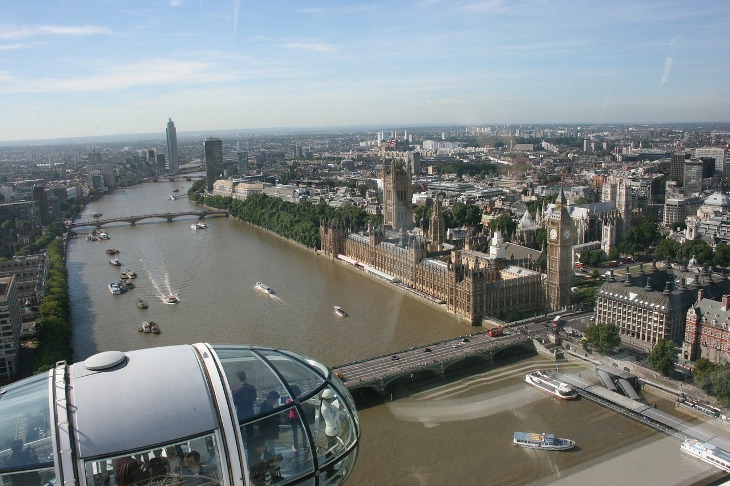 A view from the London Eye

It was formally the highest observation point in all of London for the public to view at 135 metres. However, this has since been dwarfed by the opening of the Shard, which has an observation deck on its 72nd floor, clocking in a monstrous 245 metres in height. The slow rotation of the London Eye gives a better view in general of the entire city, with a view stretching out for 25 miles.

As it has become one of the most iconic and popular tourist destinations in the entire UK, it continues to be featured prominently in the celebrations of the British people. The New Year’s fireworks display in London showcases the London Eye as its main focal point, and it has been used in other celebrations too. For instance when Prince William and Kate Middleton were married, the LED lights on the wheel were changed to red, white and blue (the colours that make up the Union Jack). It was also decorated to commemorate the 2012 London Olympics, signifying just how important this building is to the culture of the UK.