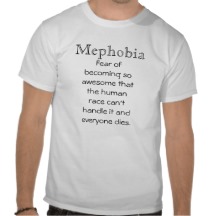 We’re sure many of you may find this slightly humourous but the phobia does indeed exist and there have been a few reported cases of people having it – though many more claim to have it!

The Urban Dictionary classify it as:

Fear of becoming so awesome that the human race can’t handle it and everybody dies.

Both Morgan Freeman and Chuck Norris are two of just a handful of people in history that are suspected of having this condition. In the world of fiction, however, many a case has been presented.  Batman, for example, only escapes the destructive consequences of this condition by passing off as Bruce Wayne.

Whilst we’re sure that most of you reading this will think this is quite a bizarre phobia, we should all be thankful that the full effect of mephobia has yet to be realized.  I hope we never see the world come to an early end due to an overabundance of one’s pure awesomeness! That would be a sad day indeed.