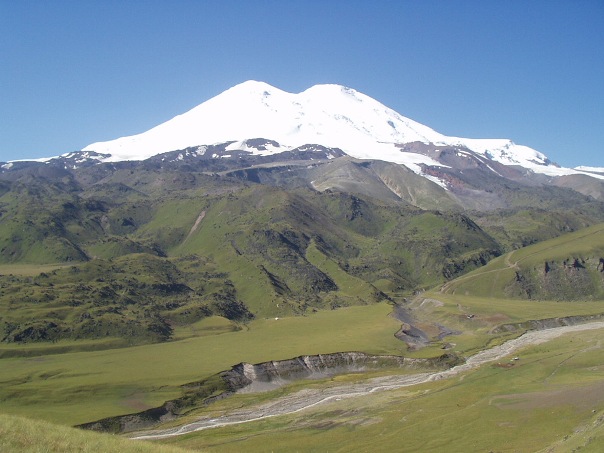 The Europeans know the mountain as Mount Elbrus, while the Karachays know it is the Mingi Taw, which basically means Thousand Mountain. Elbrus is situated in the Russian Republic. The mountain’s twin cones reach as high as 18,510 and 18,356 feet, making it the highest mountain in Europe and is what drives its popularity. Its 53 square miles of icecap feeds 22 different glaciers and in turn these glaciers feed the Malka, Kuban, and the Baksan rivers.

Over 2.5 million years ago, the volcano erupted and came to life and it still covers a huge amount of magma today. The eastern slopes are still noted for oozing sulfurous gases. Elbrus is based in the western part (coldest area) of the Caucasus Mountains, which lies in Europe and Asia.

Mount Elbrus is known in the world of Greek Mythology. The Greek God, Zeus was noted as having disciplined his arch enemy, Prometheus, by chaining him to the mountain. Prometheus introduced fire and metal works to the world, but Zeus became upset with him because he stole the fire from him and gave it to mankind. All of these myths are most likely related to the historical, active volcano.

In Russia and the Caucasus Range, Elbrus is noted as being the highest mountain. It also has been awarded with the title of being the tenth most prominent in the entire world. This peak is placed perfectly between the Caspian Sea and the Black Sea.

An aerial car or cable car system was finally constructed and completed in 1976. This would provide visitors an easy access up the mountain and carries the riders up to 12, 500 feet. Climbers are more drawn to the area during the summer months and it is not unusual for more than 100 of them to attempt the ascent on any given day. There are also Barrel Huts set up for the climbers, as a resting place, which are positioned at 13,600 feet and 15,750 feet.

Visitors tend to steer away from the mountain during the winter months. It is not impossible to attempt an ascent at this time, but the temperatures are so cold at the peak, it is almost intolerable. With -40 temperatures, humans cannot survive without adequate supplies and attire. The weather is very unpredictable as well, which makes the adventure more difficult for climbers, but this does not cause some to turn away. It is advised by the experts that descent must begin no later than 2:00 pm, due to dense fog.

First to Beat the Mountain

The Russian guide, Kabardinian Killar Khashirov was the first climber to ever beat the mountain. He was only able to peak the smallest point, but this was still an extraordinary accomplishment. He was in charge of a scientific expedition in 1829, when he finally reached his goal.

Akhia Sattaiev, another guide was able to defeat the western cone, in 1874. He was part of a group of climbers, which was originally led by Brit Florence Grove.

German forces from the 1st Mountain division controlled a portion of Elbrus for almost a year. A Russian pilot was noted for bombing one of the Barrel Huts, while it was supposed to have been filled with German military official. This was later discredited, but he was given a medal for blowing up the German’s fuel supply. The hut still stands today and is utilized by the climbers.

While there are several trails that climbers like to use for their mountain adventure, the northern route is the most beautiful. Some days there are so many travelers that it makes it difficult for the more experienced climbers to reach their goals. It is not uncommon to see many tents spaced out in this area, as well. In order to reach the high camp from the base camp, ropes are necessary due to the crevasses – some people never make it past this point. They end turning around and descending the mountain, instead of going further.

Most of the individuals that attempt to climb Mount Elbrus are very unskilled. Over thirty people have ended up losing their lives trying to ascend the mountain. The most notable deaths were in 2004, when 48 individuals lost their lives due to illnesses. Many try to climb Elbrus by themselves, without a guide, which can potentially have fatal results.

Russian Alexander Abramov guided a ten man expedition, where a Land Rover was driven to the peak. It took 43 days to accomplish this goal, but there were a lot of struggles that had to be overcome. They had to change tyres and utilize winches to pull the vehicle up and it was a continuous cycle of ascending and descending the mountain to retrieve replacement parts that had got damaged. After a lot of sweat and tears they finally reached the peak on September 13, 1997. The Land Rover was abandoned after an attempt down, when they lost control. They later returned to fetch it, but found it too difficult. It still sits in the same spot today and can be seen by other climbers and adventurers.