While his fame let him be known as Muhammad Ali, he was born Cassius Marcellus Clay Jr. in the city of Louisville, Kentucky.

As a child, Clay grew up in a middle-class black neighbourhood with both of his parents working for wealthy families. His father a sign painter and his mother being a cook and cleaner, part-time. However, Kentucky laws were currently enforcing a “code of racial segregation” towards black people, limiting them from the use of many public facilities which should have been accessible by both whites and blacks. Due to both these indignities along with other national outrages (including the murder of a 14-year-old boy, Emmett Till) which had been enforced onto the black community, it caused Clay to have a rather difficult time growing up.

Below you can find some facts about “The Greatest”.

Prior to Muhammad Ali, he had been known as Cassius X

The day after he had defeated Sonny Liston, and rising up after being considered the underdog of the fight, Clay confirmed the rumours that he had recently decided to become a member of the Nation of Island. After this confirmation, the newly heavyweight champion had the famous activist by his side and announced that he had legally changed his name to “Cassius X” (referred to as his slave name). The name Cassius X stuck with Clay until March the 6th of 1964, when he received his holy name by Elijah Muhammad, the leader of the Nation of Islam. His holy name, and what most of us know him by, was Muhammad Ali.

Shortly after the Vietnam War had ignited in the year of 1967, Muhammad Ali refused to be a part of the war and served as a U.S. militant, purely due to his religious beliefs. After this refusal, he was arrested. This was only the beginning of his issues as he shortly after received a suspension on his boxing license, and his heavyweight title was removed. He received a 5-year imprisonment and a $10,000 fine after he had been convicted of draft evasion. However, after his appeal, he was released. The New York State Supreme Court ordered that Ali have his boxing license reinstated, allowing him to return to the ring in October of 1970 and successfully defeated Jerry Quarry.

The United States Supreme Court then went on to overturn the convictions that he had received, in the following year.

One of his most famous bouts took place at 4 a.m.

In 1974, Ali managed to secure a title shot where he would go on to battle the undefeated champion, George Foreman. In order for him to gain some positive publicity for the country, Mobutu Sese Seko (Zaire’s dictatorial president), had paid both of the fighters a total of $5 million in order for them to stage the fight that took place in Kinshasa. Due to timezones, the fight was scheduled to take place in the middle of the night before sunrise in Africa, allowing for the fight to take place during the prime time for the American audience.

The fight is now referred to as the “Rumble in the Jungle” and resulted in Muhammad Ali winning in an eight round knockout, and managing to once again receive the heavyweight title that had been taken from him seven years before. 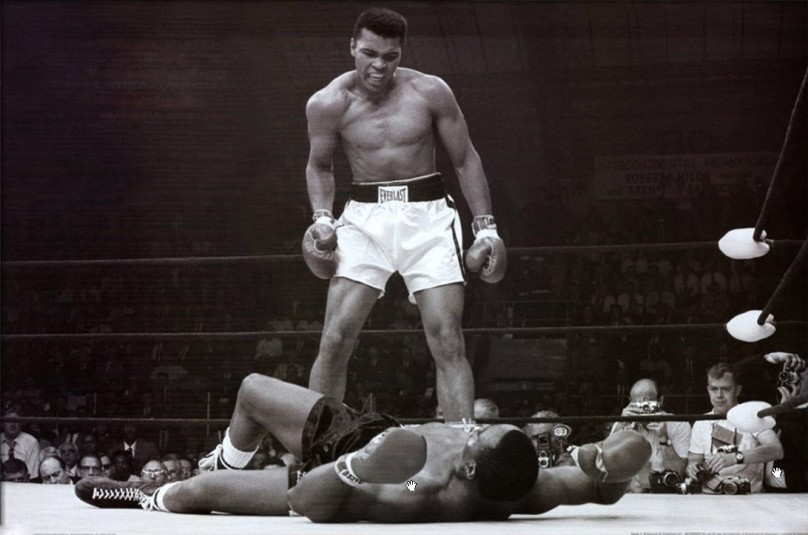 Muhammad Ali vs George Foreman: Rumble in the Jungle.

Once he had graduated high school, 18-year-old Muhammad travelled to Rome and managed to win the 1960 Summer Olympics heavyweight gold medal. In his autobiography, Ali stated that once he had returned to Louisville after his successful win, he had thrown the gold medal off a bridge, into the Ohio River. His reasoning behind this was to protest against the racism that was occurring in his town. The truth of this is still disputed and many believe that he lost the medal. At the 1996 Summer Olympics, Ali was approached to light the cauldron for the Opening Ceremony and received a replacement gold medal.

After defeating Liston, Ali’s gloves earned him more money than the defeat

Roughly 50 years after his first heavyweight championship, Muhammad Ali’s gloves were bought by an anonymous buyer for a total of $836,000 although, for the victory itself, he received only $630,000.