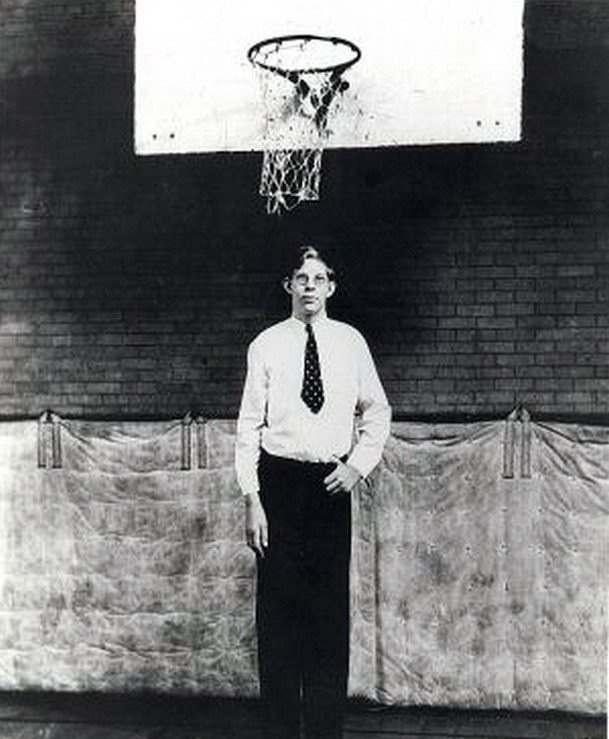 For reasons that are probably best left to be explained by psychiatrists and psychologists, we humans seem to have a real fascination with things that set records – and it doesn’t seem to matter what kind! Most everyone is familiar with the Guinness Book of World Records which is all about the biggest, the smallest, the tallest and just about anything else you can think of that sets some kind of record. In this particular case, we’re interested in the tallest man who ever lived, or perhaps it should be stated as the tallest man on record who ever lived, since it is possible that someone taller could have lived long before humans started keeping records of such things.


Alton, Illinois was home to the tallest man whoever lived in recorded history. His name was Robert Wadlow, and he was born on February 22, 1918 to Addie Johnson and Harold Wadlow. The Wadlows would go on to have four more children after Robert, who was their first born. It did not take long for Robert to show signs that he was destined to grow taller than anyone else in recorded history. By the time he was just 12 years old he was already taller than his father who stood at 5 feet 11 inches tall, and certainly would not have been considered a man of short stature. At that time his weight was recorded to be 287 pounds (130 kg).

His size resulted in many challenges that started early in life. Around the same time he surpassed his father’s height, the school he attended had to construct a special desk to accommodate is unusually large frame. Robert eventually decided to study law, and enrolled in Shurtleff College after he graduated from high school in 1936. By that time he was already standing 8 feet 4 inches tall, and was already well on his way to becoming the tallest person ever.

The human body is not well-suited to deal with the demands that such a large frame places on it, and Robert began to experience problems with his lower extremities. Leg braces helped him overcome the difficulties he had with the feeling in his legs and feet, and he managed to get around without ever having to use a wheelchair. It’s quite likely that a specially-designed wheelchair would have been required if he had.


Wadlow became very well-known for his size, and was considered a celebrity which was probably due in large part to his promotional work he did with Ringling Brothers Circus during 1938. There’s little doubt that custom-tailored clothes were necessity of life for Robert, and thanks to a promotional agreement with a show manufacturer he was able to get his size 37AA shoes free of charge. Some of his shoes are on display in the Alton Museum of History and Art to this day.

As a member of the Freemasons, Robert Wadlow was affiliated with Lodge #25 in Alton, Illinois, and was eventually elevated to the level of Master Mason. Whether or not his size had anything to do with that is not known, but it is known that the ring that was awarded to him was the largest ever created for one of their members.

It took until 1939 for Wadlow to surpass the person who held the record of the tallest person who ever lived. John Rogan stood 8 feet 9.5 inches tall when he died in Sumner County, Tennessee in 1905 at the age of 37.

On July 4, 1940 Wadlow was appearing at the Manistee National Forest Festival when an ill-fitting leg brace caused a minor injury on his ankle. The wound allowed a parasitic infection to set in and doctors eventually treated him with emergency surgery and with a blood transfusion. Due to an auto-immune disease that he was suffering from, his condition continued to decline and he died on July 15, 1940 at the age of 22. He reportedly passed away in his sleep. Just 11 days prior to his death his height was recorded as being 8 feet and 11.1 inches by two doctors from Washington University in St. Louis, Missouri. His weight at the age of 22 was recorded as 439 pounds (199 kg).

Alton’s celebrity status has diminished over the years, but he is still well-known to the people of Alton, Illinois where a statue in his honor still stands on College Avenue across from the Alton Museum of History and Art. It actually took some time for the town to recognize Robert Wadlow in that way, erecting the statue in 1986, some 46 years after his death. The Guinness Museum in Niagara Falls, New York also erected a statue in recognition of Wadlow, and there are a number of others that can be found in some Ripley’s Believe It or Not Museums.


During his life, Wadlow earned a reputation as a kind and gentle person, and is still referred to by many as the “Gentle Giant.” A song inspired by Wadlow called “The Giant of Illinois,” was recorded by The Handsome Family in 1998, and another artist named Sufjan Stevens recorded another song inspired by Wadlow in 2005 called “The Tallest Man, The Broadest Shoulders” for an album called Illinois. A better-known group, The Talking Heads, featured a photo of Wadlow and his family on the back side of the cover for their video music compilation entitled Storytelling Giant in 1988.
Pin It