In 1885 the French frigate “Isere” arrived in New York Harbor carrying perhaps the most famous immigrant ever to take up residence in the United States. Since then she has silently stood watch over those shores and been as much a part of American’s identify as the flag itself. She has been a movie star (Independence Day, The Planet of the Apes among many other movies), an ambassador and a cultural icon for well more than a century. She is, of course, the Statue of Liberty or ‘Lady Liberty’ as she is sometimes called.

Yet as easily identifiable to all Americans and also the entire world as the statue is, she is also the subject of common misconceptions and gaps in the collective public mind about her origins, construction, etc. For the sake of this monument here is some history and some facts about Lady Liberty. 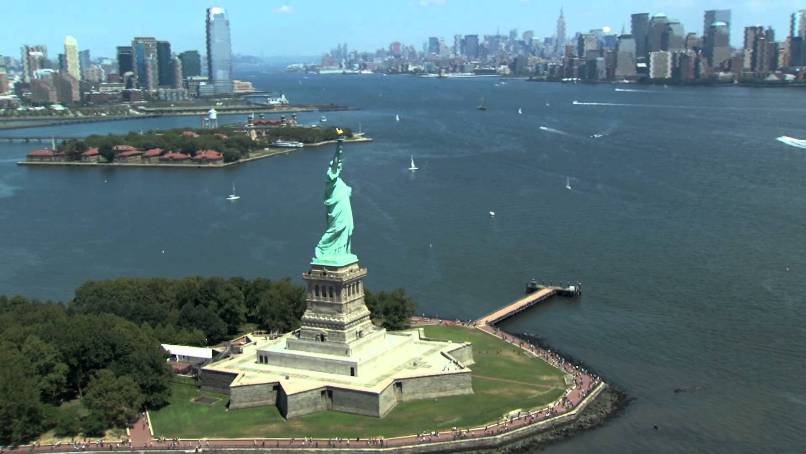 In 1865 as the US Civil War drew to a close, French historian Edouard de Laboulaye suggested that France creates a statue as a gift for America. The country was marking the end of the French Revolution and many saw the statue as a celebration of this event as well as a gift to mark the end of the American Civil War.

The sculptor Frederic Auguste Bartholdi – who specialized in large sculptures – was commissioned for the job. However, the work did not begin until 1885 due to the difficulty securing the funds needed for the massive undertaking – America would later agree to erect the base supporting the statue.

Eventually, the statue was made and shipped to America in 300 copper pieces packed in 214 crates. The individual parts were not assembled for almost a year because the pedestal had yet to be finished. The statue was reassembled eventually and on October 28, 1886, President Grover Cleveland officially dedicated the statue in front of thousands of onlookers.

According to the National Parks Service (NPS) the dimensions of the Statue of Liberty are:

Often an object becomes so familiar to most of us that we begin to feel we know more about it than we actually do. This is the case with the Statue of Liberty as well. For example, not only did Bartholdi originally plan to sculpt the lady in gold, she was also intended to be a lighthouse. Additionally, upon her opening in 1886 suffragettes of the time protested there due to the fact that women had not yet gained the right to vote. Lastly, the statue’s green tint is not due to paint it is the effect of oxidation of the copper of which she is made. As would be the case for anyone who reached 131 years of age, she has had a makeover. She was restored from 1984 to 1986.

In a time when the disposition of immigrants is debated nationally and we as a country examine our views on strangers entering our shores, it is ironic that America’s most recognizable symbol was once a stranger to these shores herself. It is also important to note that she also stood and watched as many, many immigrants arrived at Ellis Island. For many generations, she will long remain a symbol of liberty, equality, and fraternity. For this reason, she is well worth knowing.