Ever wonder why there are stupid labels on things like “Do not hold wrong end of chainsaw” on a chainsaw? Probably because some genius actually tried it once and then filed a lawsuit against the maker of the chainsaw. Frivolous lawsuits are nothing new, but sometimes they are taken to such extremes that they really are worth taking a look at – for a laugh if for no other reason.

A San Jose, California freeway became the scene of an extraordinarily cruel act one day in 2000 following a minor accident. The driver of one vehicle, a man named Andrew Burnett, pulled over after his vehicle came in contact with another being driven by a woman who was accompanied by her dog. When the woman pulled over to talk to Burnett he became so enraged that he picked the woman’s dog up and threw it into oncoming traffic. The dog was killed and Burnett was sent to prison for three years.


When Burnett was released from the slammer he filed a million dollar lawsuit against the woman for defacing his image, resulting in emotional distress and loss of income due to his inability to hold down a job while in jail. Fortunately, a judge decided the lawsuit was in fact, as silly as it sounds, and tossed the case out of court.

2. The Case of The Missing Pants 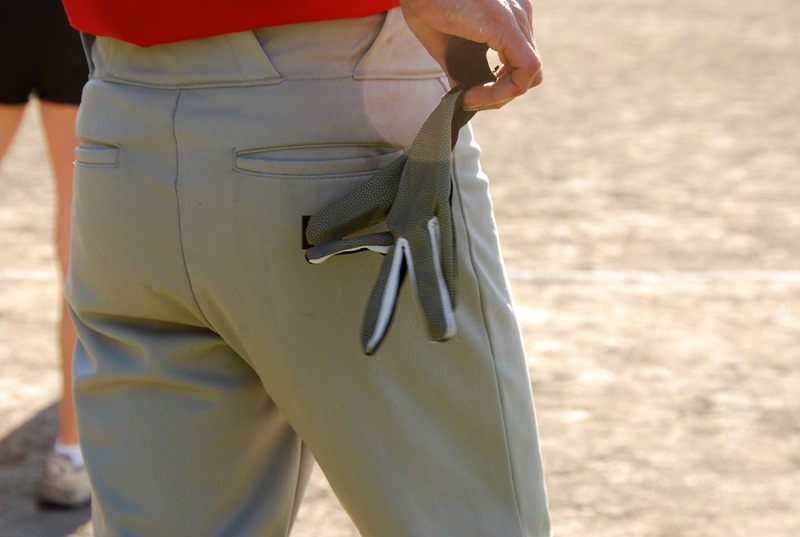 If this lawsuit were not ridiculous enough simply due to the circumstances, the fact that it was initiated by a judge really takes it over the top! During 2005, a judge in Washington, D.C. brought a pair of pants to a dry cleaner for some alterations. When the pants were misplaced, the judge decided to punish the proprietors by slapping them with a $67 million lawsuit. The amount was later lowered to $54 million which must have been a tremendous relief to the owners of the dry cleaning business (sarcasm).

The judge seemed to have an unusually close relationship with his pants because he actually cried in court while he detailed his experience. He eventually lost the case although he no doubt cost taxpayers a pretty penny during the two years it took to put it to rest.

3. The Husqvarna From Hell

That’s what the plaintiff in this next case would have you believe regarding the trauma he suffered as a result of an unfortunate accident. Everardo Garfias was reportedly mowing his lawn when he was attacked by a swarm of yellow jackets. In the ensuing confusion, Garfias claimed that he jumped off the lawnmower to escape the attack only to be run over by the wayward machine. Citing injuries he allegedly suffered whilst tangling with the machine, including severely lacerated legs and a missing kneecap, Garfias filed a lawsuit against Husqvarna Professional Products, the maker of the mower as well as Kawasaki Motors Corp., the maker of the mower’s engine. He claimed that the switch that shuts the mower off when no operator is present failed. Don’t be surprised if future Husqvarna models sport labels that read, “Don’t jump in front of moving mower!”

4. The Blind Leading The Blind?

NewView Oklahoma is an agency that probably takes pride in its efforts to help visually impaired individuals. NewView allegedly hired a man named Steve Theis to work as a machine operator. Theis may be unfit for that occupation for a number of reasons, but the one that stands out is the fact that he is legally blind. Tasked with making wooden chocks by cutting them with a radial arm saw, Theis accidently severed his right hand with the device. Theis filed a $75,000 lawsuit claiming that NewView acted recklessly by having him operate the saw. We’re not entirely sure where to place the blame for this one, Theis for agreeing to operate the machine or NewView for assigning a blind man to that particular job. Assuming, of course, that Theis’ claim is factual.

5. Nobody to Sue? Sue Yourself!

This may be the oddest case of them all. A prison inmate who obviously has a few things to learn about how to “love thyself” filed a $5 million lawsuit against himself. Placing the blame squarely on his own shoulders, his claim was that he had violated his own civil rights by getting arrested. At first glance, this seems like a plan concocted by someone who was not playing with a full deck. This jailbird had an ace up his sleeve, however. Claiming that he didn’t have the $5 million to settle his suit because he was a ward of the state, he attempted to convince the court that the state should make the payment on his behalf. Unfortunately for the inmate, it was the judge who was holding all the cards and he promptly dismissed the case.

Although we’ve been amused in the past by statements that are routinely made about “erections lasting longer than four hours” on certain TV commercials, the case of a California motorcycle enthusiast is no laughing matter if there’s any truth to it. The man claims he suffered with an erection for an unbelievable 20 months which he blamed on the “rigidity of the seat” on his BMW motorcycle. He claims that a fateful 4-hour cruise on his bike resulted in a stubborn stiffy which cost him lost wages and caused emotional distress. He filed suit against BMW and the manufacturer of the stimulating seat.

Everyone knows that prison inmates have a lot of time on their hands. While some spend time playing cards, watching TV or working out, 61-year-old Dale Maisano uses a copious amount of his free time filing lawsuits. The litigious lawbreaker recently filed his 368th lawsuit – this time because he claimed bad prison food gave him a stomach ache. It must have been one whopper of a belly ache judging by the $1 trillion dollars Maisano was seeking. Maisano is 7 years into a 15-year stretch in the can so he will presumably have plenty of time to file another 368 lawsuits before he is released. He obviously would like to leave prison a very wealthy man, but considering the number of lawsuits he’s prepared, he’s much more likely to leave with a law degree than a fortune.

Advertising agencies understand the concept of selling the sizzle and not the steak, but it appears that one wishful consumer took Budweiser’s babe-filled commercials too literally and proceeded to sue the company for false advertising. Stating that the commercial demonstrated the beer’s ability to conjure a “scenic tropical settings [and] beautiful women and men engaged in endless and unrestricted merriment,” Richard Overton’s 1991 lawsuit sought a relatively modest $10,000 for the emotional distress, mental injury and financial loss that he allegedly endured when he discovered that the commercial was just a commercial. There was no word on whether Mr. Overton also believes that consuming certain breakfast cereals would cause rabbits, tigers and leprechauns to appear.

A Dallas Cowboys fan got more than a rest when she opted to park herself on a bench outside the team’s stadium on an August day in 2012 when the temperature was hovering around 100 degrees. Just about everyone knows that sitting on a black bench in the sun on a 100-degree August day in Texas might toast your buns a bit, but this particular fan was either a bit slow-witted or suffers from an unusual medical condition which has resulted in her inability to feel pain. She filed a lawsuit against the team for not posting signs to warn passers-by that the bench might be too hot to sit on. Her claim alleged that she suffered third degree burns on her legs from the toasty bench but we wonder how long she had to force herself to remain in place on that bench to receive even a first degree burn.

Many of us recall the gross-out reality television show “Fear Factor” which often involved participants eating disgusting things for a chance to win $50,000. One viewer, who apparently suffered from an unusually weak stomach was allegedly so upset by one scene that his blood pressure rose rapidly, resulting in dizziness which then caused him to walk into a doorway that he did not see due to his distressed condition. The suit claims that the mishap resulted in “suffering, injury and great pain,” which he thought was worthy of a $2.5 million payout from the program’s producer, NBC, which responded by stating that the man’s claims were “completely without merit.” The man who filed the lawsuit, 49-year-old Austin Aitken, works as a paralegal and unsuccessfully filed two lawsuits against tobacco companies in the 1990’s.