The Burj Khalifa in Dubai is currently the tallest building in the world. It stands an amazing 2,722 feet (829.8 meters) tall. Construction started during September of 2004 and the building was completed in October of 2009. The structure was designed by Skidmore, Owings and Merrill, a Chicago-based architecture and design firm that was founded in 1936. Using a “bundled tube” design, the Burj Khalifa required less than half the steel that was used to construct the Empire State Building which is only 1,250 feet (380 meters) in height. 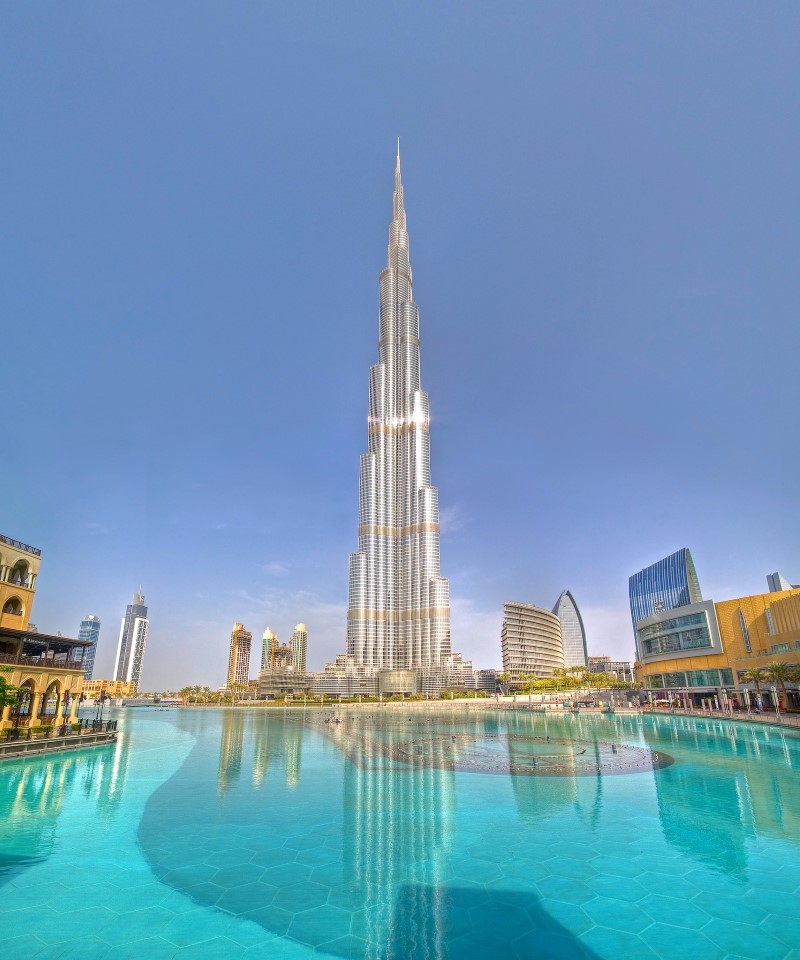 The construction effort was headed up by Samsung Engineering & Construction of South Korea, which had been involved in a number of other high-rise projects around the world. After about three years of construction, the incomplete Burj Khalifa officially became the tallest building in the world as it surpassed the CN Tower in Toronto, Canada.

The Burj Khalifa was first conceived as an idea for an impressive centerpiece for a massive development project that would involve the construction of 30,000 homes, nine hotels, over 7.4 acres of parkland, and at least 19 residential towers. A driving force behind the decision to start the project was made by the government to diversify the country’s economy by moving away from oil production and more towards tourism and the service industry.

As one would expect, a tremendous quantity of building materials and many hours of work were needed to construct the world’s tallest building. When all was said and done, the project required 431,600 cubic yards of concrete, and 61,000 tons of steel and rebar, and required an incredible 22 million man-hours of labor. Construction required special concrete formulas that were able to withstand the tremendous force of the building’s weight. Much of the concrete had to be poured during the night-time hours and even then was cooled with ice because the curing process could be compromised by excessive heat during the hot summer months

Constructing the tallest building in the world was certainly not an inexpensive endeavor. Total estimated cost of construction was $1.5 billion. The building was originally to be called Burj Dubai, but the name was changed prior to its opening to Burj Khalifa to honor the President of the United Arab Emirates, who helped Dubai tremendously with financial aid when the global economic crisis of 2008 and the country’s many development projects put the project in jeopardy.

Since the building had to be designed to withstand the extreme heat of Middle Eastern summers which can raise temperatures well over 100 degrees Fahrenheit, more than 26,000 specially-treated glass panels were used in the exterior construction and were designed as an anti-glare shield which protects the interior of the building from the scorching desert sun.

A spectacular grand opening ceremony for the Burj Khalifa took place on January 4, 2010 and featured a display that included 10,000 fireworks, light displays, water displays and sound. UK lighting designers Speirs and Major were hired to lend their expertise to the ceremony that was covered by media outlets around the world.

As with all things that are recognized as the world’s best or tallest, the Burj Khalifa attracts its share of attention that isn’t necessarily wanted. It’s been a tempting destination for daredevil base jumpers who seek the notoriety of having jumped from the world’s tallest building, although some of them did so with the cooperation of the building’s owners. There was also at least one suicide recorded when a man who was employed in the building jumped from the 147th floor. It was reported that he was distraught about his employer’s refusal to grant him leave.

On a lighter note, master chocolatier Andrew Farrugia constructed a replica of the world’s tallest building at the Dubai International Airport using high quality Belgian chocolate in November of 2014. The mouth-watering structure stood an impressive 44 feet tall and was recorded in the Guinness Book of World Records.