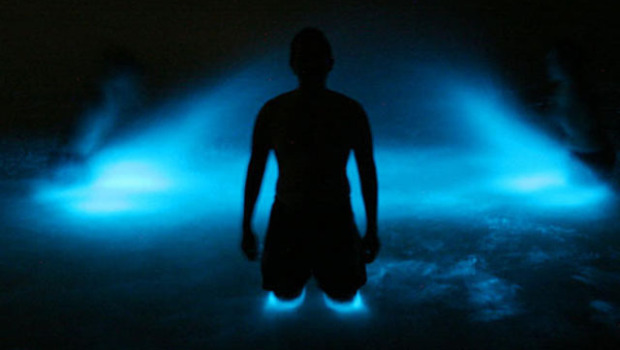 Known as “The Glowing Lake”, the phenomena is quite a unique tourist attraction.

There is however an explanation for this. The lake is swarming with tiny microorganisms, called Noctiluca scintillans that have a natural luminescence. These organisms glow a ghostly blue and give the effect that the lake is glowing.

The concentration of bioluminescent organisms it would take to create this “glowing effect” within the lake is extremely rare and is a very unusual concentration to find anywhere in the world. 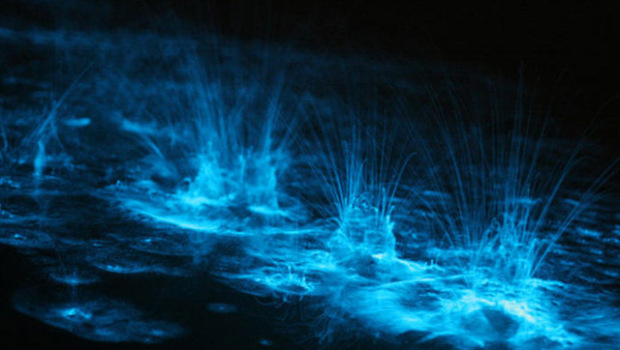 Gippsland is made up of several different lakes; these are, Lakes Wellington, Victoria, King, Reeve, Tyers and Coleman.

1st December 2006 is where the story begins. This was when the bushfires began in Victoria, Australia and lasted for 69 days. Much of the catchment area for the Gippsland lakes was destroyed by the fire and, at the time, people knew that the fires would have an affect on the lakes however, how severe was to be determined by the intensity of rainfall they were then to receive.

That winter the rainfall came as expected but it was an unexpected amount that ended up falling from the sky.  On 27th June 2007 100mm of rain fell across Gippsland.

This resulted in flooding and because of the previous alpine bushfires the rainwater washed ash, soil, nitrogen and other nutrients into the lakes. The following summer the lakes were blue-green with algae due to the polluting of the waters. This algae is called Synechococcus and because it had not been found in such large concentrations before people weren’t sure how long it would last.

Summer 2008 approached and a new species called Noctiluca Scintillans was discovered. This new species fed on the Synechococcus.

Noctiluca Scintillans is a microorganism that is naturally bioluminescent. It uses this natural glow to attract prey and ward off predators. The organisms glow a ghostly blue and give the effect that the lake is glowing.