In the late 19th century little was known about the ancient King Tutankhamun, until his discovery by an English archaeologist Howard Carter on November 4, 1922 and he soon became the most famous Egyptian Pharaoh that ever lived.

‘The boy king’ as he was often referred to was only aged 9 when he became ruler, although his reign was a pretty short-lived one, only lasting until his death at the age of 20. If it wasn’t for his discovery by Carter he would have been another name lost in history as his reign at the time was deemed unnoteworthy. But the amazing discovery of his tomb and its valuable treasures, all seemingly intact, granted him worldwide and everlasting fame. The 3000-year-old mummy of the king was the only clue to the life and death of King Tut himself. 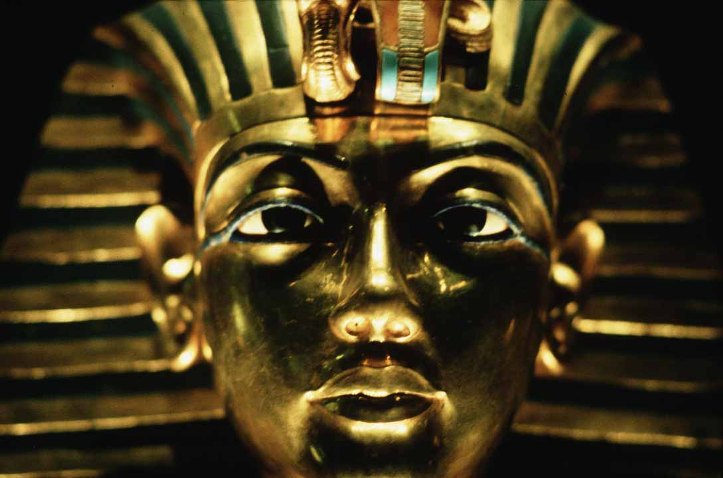 King Tut was born in Akhetaten, the then capital city of Egypt in the year 1341 BC, which was during the period when Egypt was the most powerful country in the world. He was given the name Tutankhaten, meaning “the living image of Aten”. His father was called Akhenaten, previously known as Amenhotep and his mother known as ‘younger lady’. However, they were not only King Tut’s mother and father – they were also his brother and sister and therefore King Tut’s uncle and aunt making King Tut a product of incest. Incest was quite common in ancient Egypt because they believed in keeping the family bloodline ‘pure’.

Tutankhamun (or Tutankhaten at the time), assumed power shortly after his father’s death at the age of 9 whilst also marrying his half sister Ankhesenamun, and having two daughters, though tragically both stillborn. Whilst inheriting a very rich, resourceful and historic land, the first few years of his reign would have been heavily assisted by his advisors, one known as Ay who held the title of Vizier and Horemheb who was Egypt’s main military commander.

Tutankhamen inherited many enemies when he became Pharaoh because his father Akhenaten, worshipped one God ‘Aten’ the sun disk, and was a supreme worshipper. He had religious visions and built an entire city in the desert and made it the new capital, whilst disregarding any other worshipping. His new cult religion didn’t go down well in the city, with a vast temple devoted to the sun god. He had created a new religion, and made new enemies within a city already in a turbulent period.

King Tut’s first order was to rescind worship of Aten in favour of traditional polytheistic beliefs. This was when he changed his name from Tutankhamen to Tutankhamun which means “the living image of Amun”, restoring the old faith of Amun and apposing the previous religious cult of ‘Aten’. The priest of Amun had their privileges restored so the worship of the old gods were permitted, and the capital of Egypt was returned to Thebes. This was a very popular move. His main advisor Ay most probably elected these changes, as he was the equivalent of a prime minister today.

Much debate still rages as to how he died and many theories are still unproven, athough his young age and rushed burial suggests it wasn’t a natural death. In 1968, the murder theory began after scientists X-rayed King Tut’s body, which showed loose bone fragments in his cranium, which were interpreted as possible evidence of a blow to the back of his head. The murder theory suggested that his advisor Ky may have conducted this, as he became heir to the throne as King Tut had no surviving children. Ay then forced Tut’s widow to marry him soon after.

A CT scan conducted in 2005 ultimately proved once and for all that King Tut was not murdered from a blow to the head, completely debunking an age old theory. The scan also revealed no evidence of skull injury, and that the 1968 X-ray process was slightly, but crucially flawed. The CT scan with all of its capabilities showed he had a break in his left leg at the knee, which happened before his embalming and probably from epileptic fits resulting in a fall. Recent DNA tests showed he had malaria, so this and the broken leg might well have caused his death. Although this type of injury isn’t life threatening today, at the time this could have caused infection and probably loss of blood, eventually leading to death.

More recently a detailed analysis was conducted into King Tut’s appearance, showing he had buck teeth, a club foot and girlish hips. He would have relied heavily on walking sticks, hence the 130 that were found in his tomb. King Tut, his father and his grandfather all died at a relatively young age, suggesting there was a pattern and a potential inherent disease running through his family. Findings suggest his father had Temporal Lobe Epilepsy, causing the hormonal imbalance King Tut himself inherited. This was probably due to their ‘bloodline’ and results of incest. This kind of illness during this period would be untreated, and would cause fits which would have led to many bumps and fractures.

The other fractures and breaks occurred after he had died and most likely after his embalming and post Howard Carter’s discovery. During adolescence around the age of 13, he developed Kohlar disease (an acute inflammation) which caused a great struggle to walk, thusly making it impossible to ride a chariot. The many canes that were found aided his movement and weren’t just ceremonial.

Burial at The Valley of the Kings

Like a giant cul-de-sac but well protected, the Egyptians began burying their rulers here around 1500bc, having previously been buried in pyramids. This valley was chosen because it was deemed safe from tomb raiders who used to break into the pyramids, stealing the treasures from within. However over the centuries, thieves still managed to steal from every tomb in the valley, except for Tutankhamun’s tomb.

The discovery of the famous tomb was made by Carter in 1922. The search for the tomb began in 1917, and eventually after relentlessly pursuing every possible clue and whilst also on his last year of funding from his sponsor Lord Carnarvon, Howard Carter found the tomb on November 4th, and was opened November 26th. It took ten years to catalogue and study all content of what was to be the best preserved tomb ever discovered.

King Tut’s tomb was different as it was unusually small, poorly decorated and rather un-royal in comparison to that of other tombs. Strangely it was still crammed full of royal possessions also buried within. Other kings were decorated with hundreds of detailed and intricate portraits of Pharaohs and Gods. The paintings which were created were large and rather odd for a king. 3000-year old mould was recently identified, which means that his tomb was decorated in haste, painted on wet plaster and all performed rather quickly. This would suggest this was a hurried burial.

Most Pharaohs had vast tombs made for them, and since King Tut’s death was so premature they only had 70 days to finish the tomb, plaster the walls and then paint on them – his tomb was sealed before the plaster was even dry, which is what allowed the mould to grow on the walls. King Tut’s tomb was meant to be for someone else.

King Tut’s body was robbed by thieves possibly during World War 2 whilst his tomb was unguarded. They created damage removing his jewels; his chest was severely caved in and his head unattached. Some theorists even think it may have been the doing of Carter.

3500 articles were found in his tomb. His gold burial mask is a very popular symbol and resides at the museum in Cairo, weighing ten kilos. 236 Shabti figures were found, which were to serve the departed king in the afterlife. When Carter began removing coffin parts, he found a linen shroud covered in plant remains, with everything dried and delicate. This included wild celery leaves, strips of papyrus with lotus petals and cornflowers and a wreath made from cornflowers laid at the head.

As Carter got further into the more solid-gold innermost part, he found another linen shroud lying on top of King Tut’s torso. Below the golden face were layers containing beads, flowers, berries and leaves. Coriander was found in his tomb as a vital medicine, baskets of dawn fruit and 20 sealed clay pots containing honey which can of course last for thousands of years and remain edible. Everything in his tomb served a purpose throughout his life, and remained to resume so in the afterlife.

Curses always had a place amongst ancient burial discoveries dating back to the 19th century, and multiplied after the discovery of King Tut’s tomb. It is believed a person who enters a tomb and disturbs an ancient Mummy or Pharaoh can cause bad luck, illness or death. There isn’t any science to support this theory, some arguing the potential of bacteria or radiation. In popular culture it was said King Tut’s tomb contained a curse inscribed inside, but that is just a myth as no such evidence exists.

Howard Carter died of natural causes in 1965, although Lord Carnarvon died in 1925 from an infected mosquito bite on his cheek. It is said that on the day he died all the lights went out in Cairo, his pet canary was killed by a cobra and his dog supposedly howled before dying at the time of his master’s death. The cobra was a symbol of protection of the Pharaohs and long before the newspapers invented various tales. Although he had in fact died before they finally entered the room containing King Tut’s coffin, his death was still quoted by Sir Arthur Conan Doyle as being the result of a “Pharaoh’s curse”. His tomb at the top of Beacon Hill, Burghclere, Hampshire, and his country house, Highclere Castle, contains his collections from Egypt. Incidentally the house itself serves as the location of the popular television series Downton Abbey.

Tutankhamun would have hoped to continue to live in the after life for eternity and because of his treasures and hysteria, he has achieved worldwide fame and immortality that other Pharaohs could never match. He has achieved so much more in death than he did in life.