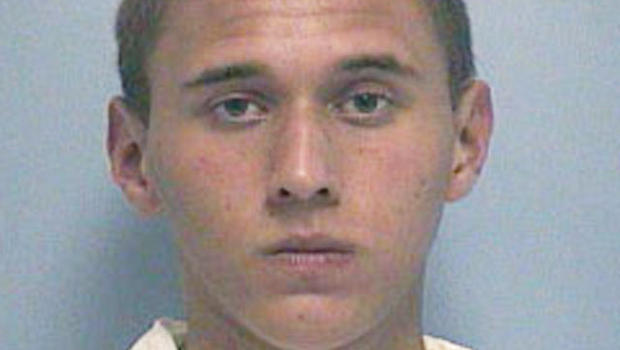 Nobody throws a party quite like Tyler Hadley, and for that we can all be thankful. It’s not at all unusual for a teen to throw a house party when he knows his parents are going to be out of town for a while, but Tyler took it a step further to make certain his parents would not interrupt the festivities.

Tyler had been telling his friends that he was planning a big party, but they were suspicious because he has been having some problems at home and everyone knew his parents has been clamping down on his activities more than usual. Still, Tyler insisted the plans for his party were in the works and it would be one hell of a party at that.

Finally, on the night of July 16, 2011 it was on. Tyler put the word out on social media that he was ready to start receiving guests. When friends asked about the likelihood of his parents catching them in the act, he replied, “They Won’t. Trust me.” Little did they know just how completely they could trust Tyler to keep that promise.

There wasn’t a whole lot to do in Port St. Lucie, Florida on a Saturday night. The town was a bit of a dead zone for teenagers looking to have a good time. It was a place better suited for retirees to settle down and it had the golf courses, bingo halls, assisted-living facilities, and funeral homes to prove it. A blow-out house party in sleepy Port St. Lucie was something not many restless teens could pass up and the Hadley home was soon jumping with the rowdy chatter of 60 kids. Tyler probably put a bit of a damper on things when he instructed guests that there was no smoking allowed inside because it was his parents’ house. That rule was later dropped, however, when a nervous-looking Tyler decided he’d rather keep the crowd inside and not risk one of the neighbors calling the cops due to all the racket.

Kids will be kids, and the house was getting trashed to some extent, with bottles being broken on the floor and cigarettes being snuffed out in the carpet. Some of the attendees were obviously a bit concerned that Tyler’s parents would return and see the condition of the place and kept asking him about their whereabouts. Depending on who was asking, the answers were all coming back different. He told one attendee that his parents were in Georgia and told another that they were in Orlando, and to yet another he said that they no longer lived there and that he now owned the house.

Tyler was always a bit of an oddball according to most of the kids who knew him. He was very quiet at school, almost silent, but was prone to bizarre outbursts in class that didn’t really make sense to anyone, except maybe to Tyler. He seemed to harbor more than the usual amount of anger for his parents whenever he had disciplinary problems at home. He once vowed to kill his parents when he was 10 years old following an argument with his mother. More recently, another friend who was not at the party because he was out of town visiting his grandparents for the weekend reported that Tyler said something chilling to him two weeks before the party. He said he was planning on murdering his parents and then throwing a big party afterwards with his parents’ bodies still in the house. His friend figured it was just a sick joke. After all, people say stupid things all the time that they don’t really mean.

Apparently it wasn’t considered all that unusual for Tyler to talk about killing his parents. It was a threat he had made a number of times to various people and it was never really taken seriously. Why should it be? How many kids actually kill their parents? They probably thought that kind of thing did not happen in sleepy Port St. Lucie.

During the course of the night various attendees noticed things that didn’t quite seem right. A few of them noticed an awful odour and another discovered a thick, brown, sticky substance on the floor under a table when he retrieved an errant ping pong ball. After a while guilt seemed to be gnawing away at Tyler and he started telling a few select friends that he had killed his parents and that he would be going to jail for a long time if he was caught. It was not entirely clear how many of them believed him, but there were signs like bloody footprints that Tyler pointed out as if to prove he wasn’t lying.

When he let one friend look in a bedroom, there was little doubt left about what Tyler had done. There was a pile of bloody towels on the floor with what appeared to be someone’s leg sticking out from under it. Things really started to unravel at that point and Michael revealed to his friend what he had done. He confessed he had beat both of his parents to death with a hammer and stashed their bodies in the bedroom. His friend hung around for a while taking selfies with Tyler and drinking before the kids partying at Tyler’s house got word of another house party going on around 2:00 am, and most of them decided to go check it out.

When the rowdy kids piled into their cars and tore down the normally-quiet street with stereos blasting, one neighbor had finally had enough and called the police. It was probably easier than he thought it would be for Tyler to get rid of the cops when they showed up at his door. Tyler told everyone to get out of sight and stay quiet while he talked to the police. They told him there was a complaint about the noise and Tyler probably promised to keep it down. The cops left and the remaining attendees resumed partying.

Sometime after 4:00 am the police showed up again. The friend Tyler had confessed to had called the Crime Stoppers hotline and told them everything. After observing the goings-on for a time, the cops went to the door and Tyler emerged. He was placed in handcuffs. The cops searched the house and found the grisly scene in the bedroom.

Since Tyler Hadley was two weeks short of his 18th birthday when he murdered his parents, prosecutors will not be able to seek the death penalty, but they can try to get him sentenced to two life terms. As for Tyler, unbelievable as it may sound, has considered becoming a minister when he gets out of jail. Jail tends to do that to some people.