A common misconception occurred during the 18th century about the Vikings, and heavily developed into a more romanticised view during the 19th century. The Vikings were often depicted as violent, heathen adventurers who pillaged and conquered many lands. Popular mythology also views them as blood-thirsty, blonde haired men who wore helmets with horns. The fact is the Vikings were pirates from the late 8th to 11th century and had a massive impact on western society, enjoying only a short reign. This reign was known as ‘The Viking Age’. 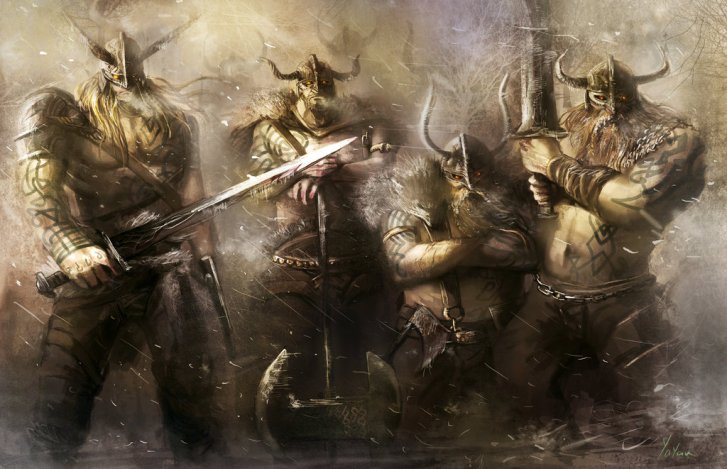 In the old Norse language ‘viking’ meant ‘a pirate raid’ as which they were famous for their long distance sailing between AD 800 and 1066. Vikings originate from the three countries of Scandinavia which are Denmark, Sweden and Norway. During this period many Vikings left Scandinavia and travelled to other countries such as those within Great Britain and Ireland whilst some went to settle in new lands as craftsmen, farmers or traders. Others left to fight and steal treasure.

They had their own Pagan religion worshipping gods, and spoke of Norse myths consisting of many mythical stories about gods and goddesses, giants and strange creatures. When a Viking died in battle, they believed that they went to Valhala which was the Viking heaven, a great hall with the dead feasting at long tables. Here they’d have plenty of fights and drink from the skulls of their enemies. If they died any other way, they’d go to Viking hell, where they would stay in a freezing cold thatched hall where it’s roof timbers would be made from the spines of serpents that dripped poison onto those below. They would also have nothing to drink but goat’s urine.

They were either buried or cremated. A Viking chief would have been given a ship burial, as well as someone else of a high status. A Viking man would have been buried with their sword or spear head, as they were needed with them for the afterlife. Viking women were buried with their decorated broaches, and some also had a whalebone plaque which was an exotic object that indicated the status and wealth of the individual. A whalebone plaque also contained a glass smoother, that was used to smooth linen, or other textiles.

Their lifestyle and medicine

They trained their children to fight at an early age as their culture was pretty much set on fighting. They began fighting amongst other Viking tribes over kingship, territory or wealth, and before long they came to a sense of unity during the late 700’s and prepared to venture beyond Scandinavia to invade other countries.

Vikings generally took pride in their appearance. The men all had beards which were regularly trimmed, as some stories claim that men who were unable to grow a beard were mocked. They also wore eye makeup and their hair was washed and cut regularly by the women, who themselves wore their hair long. There was by a medieval law book prohibiting women from wearing their hair short.

Their first-aid was certainly unique. To determine how deep and potentially fatal a wound was they would first feed the patient soup consisting of onions, leek and a mixture of herbs. Once consumed they would sniff the wound, and if they could smell the soup through the wound, it would mean the wound was a deep one, otherwise it wasn’t deemed too severe. They also believed in tasting the blood from the wound, and thought an internal wound would taste much different to a flesh wound.

They had a radical belief that a mortally wounded man could be cured by nearby elves, who would use their magic to save him. Blood from a bull that the victim had previously killed would be spread over a hill-side, along with meat left as an offering.

Vikings started out living in hollowed-out hills, so they had no windows. They would use animal excrement as fuel to burn a fire, so having no windows would have driven them outside where they’d become cold again. This was a good reason to leave and find new lands, and how they ended up in Saxon homes.

Viking families all lived together in one house. Parents, grandparents and children all lived together, and when the eldest son became head of the family, he would be in charge of the farm, be responsible for their overall well-being, and made sure the family had all the provisions needed. The lady of the household ensured food was always on the table. As well as making cheese and butter, she’d have to make enough types of food to last through the winter, making dried or smoked meat and fish for storage. She was also expected to know how to make medicine from herbs, to care for the sick and wounded. As the husband went hunting, trading or general Viking, she was left to care for the farm and its animals. Rich families also had servants or slaves to help whilst the women wore the keys to the food chests around their waist signifying authority.

Girls were married by the age of 12-15, with an agreement between families which formed an alliance between the two for mutual help and protection. The girl had little say in the matter, and was generally regarded as a possession of the family. Reputation was important too, a Viking girl’s reputation reflects on her family’s. If rules of courtship weren’t followed amongst Viking families, it could lead to violent demises of families and Viking bloodlines. Tradition was very important and many blood feuds took place.

In some areas of Viking settlement, there were laws that dealt with any improper conduct towards a Viking maiden, called the Gotlund Law, where fines were upheld, and the victim was paid a specific amount in silver, (depending on the level of inappropriateness) paid out accordingly. This stopped the need for any potential bloodshed.

They sailed across the North Sea and the North Atlantic with violent intentions. For this they would use very strong and sturdy ships that could survive ecological and environmental happenings. Their sails were red and white and on the front of the boat there was a scary threatening face, Usually a dragon’s.

Their favoured targets were the British Isles, as well as France and even as far south as the Mediterranean. They had perfected the longboat for successful sails up river, as this was their only real means of travel beyond their hometowns.

A favoured weapon of a typical Viking man was the battle axe. They were much cheaper and easier to contain, as swords were expensive and more valuable. A popular myth was that they use double-bladed axes, but this was not the case; they would use a basic single blade axe, one that a farmer would normally use for chopping wood. However, later on they became modified into a more convenient, and even deadlier weapon, proving quite lethal in battle, as its curve in the blade allowed the user to ‘hook’ an opponents leg. The axe was never actually thrown at an opponent during battle, only on occasion where a Viking was retaliating from being hurt during attack. The double-edged sword was still the more devastating and terrifying weapon. This was often passed down from father to son, and the boy was taught at a young age.

When they were at sea and unsure of their whereabouts, they would use Ravens to help them find land. A starving raven would instantly head in the direction of an island to find food. At night the Vikings also used the stars to help navigate. When the Vikings raided England they used to target towns with monks, as they were an easy target. They enjoyed killing, and taking from the monks was easy. The Vikings would wear makeup like face paint to frighten their opponent or captor.

Monks were often kidnapped and used as slaves, as they could perform many household and farming tasks. One major attribute of a monk was that they could read and write, since a Viking couldn’t do neither. Vikings would use monks to write up and manipulate their history. This made monks highly valuable and highly priced as slaves, and were sold all over Europe including as far as Italy.

What happened to them?

The Viking age ended in 1066, this is generally when the Viking raids stopped. The battle of Stamford bridge marked the end of the Norwegian King Haraldr, who was killed attempting to reclaim a portion of England. This was the last major Viking incursion into Europe. The Christian church arrived in the Viking lands towards the end of the Viking age. The Viking raids were not in keeping with the ways of Christianity. So it’s no coincidence that the decline of the raids weren’t due to the arrival of the church.

The Vikings were not completely captured and conquered, and they didn’t all die, they simply stopped raiding and preferred settling down with the family. They continued living their lives in Scandinavian countries and in the settlements created during the Viking age. The Vikings stopped raiding because of the changes taking place in European societies, which made raiding less profitable and desirable.

When the Viking age began, the Norse society had plenty of free, land-owning farmers, who had the necessary time to go raiding, and the European lands they raided were basically defenceless. By the end of the Viking age, most European lands had strong armies, with trained and organised troops who could mount an effective defence against the Vikings.

Some of the more desirable attacks like the island monastery at Iona had been moved 20 miles further inland for safety, due to previous raids. Other places had become fortified and modified with more built up towers, making it easier to defend from the Viking raids. People could also be moved or evacuated quicker thanks to these modifications.

So the Vikings never really disappeared. They just had fewer and fewer raids and started losing their identity, and reputation. They were no longer Vikings, they were simply known as Swedes, Danes, Icelanders, Greenlanders and Norwegians.