Camels are thought to have originated around 40 million years ago, in the Americas, migrating to Asia before the last Ice Age. The two types of camel are the Dromedary, which has one hump, and the Bactrian, which has two humps. A hybrid (a crossbreed of the two species) has one long hump and is bigger and stronger than either of its parents. 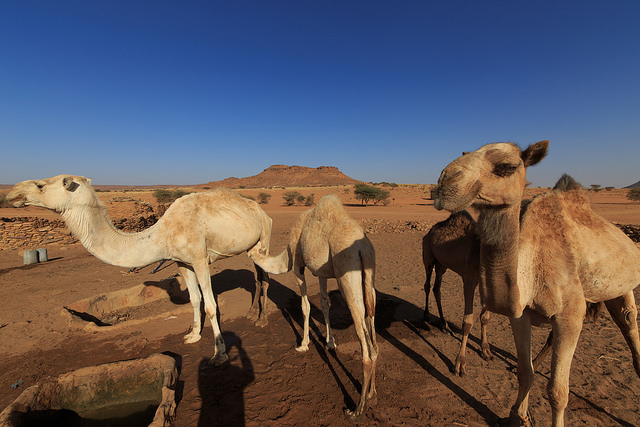 There are approximately 14 million Dromedary camels in the world today. Dromedary is a Greek word meaning fast or swift.  The Dromedary has a long neck and legs and, although known for having just one hump, possess an undeveloped hump just above the camel’s shoulders.

They are found in India, the Middle East and northern Africa and have a smooth, year-round coat, which is brownish in colour.  They have been domesticated for around 4000 years and are commonly known as “the ships of the desert,” due to the easy way they can transport humans across desert sands.  The wild Dromedary is extinct, but there is a feral population of around 250,000 in Australia after they were imported there in the 19th century for use as pack animals across the vast deserts.

The Bactrian camel is usually dark brown in colour with shorter legs and a stockier body. They are found in central and northern Asia and were domesticated nearly 5000 years ago, in the Bactria region, known as northern Afghanistan. Whereas the Dromedary must cope with the hot, dryness of the sandy desert, the Bactrian is designed to withstand harsh, cold weather in rocky deserts. It grows a thick, shaggy coat that falls away as the season’s change.  Temperatures can drop to as low as -20°F (-29°C) in the winter, but in the summer, can be as high as 100°F (38°C).

They were originally used as draft and pack animals and became the only means of transport on the Silk Road. Today, there are around 1.2 million domesticated Bactrian camels, but less than 1000 wild Bactrian camels remain in the Gobi Desert due to loss of habitat and hunting. They are now on the critically endangered species list.

So why do camels have humps? Contrary to what many people believe, the hump is made up of fatty tissue and does not contain any water. A camel stores up to 80 pounds of fat on its back, which is converted into energy when food and water are scarce.

Camels can endure extended periods of travel, up to 100 miles (161km) in the desert, without eating and drinking. In the summer, they can last five days without any water and, if they are not carrying extra weight, two or three weeks. They can survive for up to forty days without food, lasting up to six months in the winter. A camel can easily lose up to a third of its body weight without suffering any effects.

When the camel’s fat reserves have depleted, the humps become floppy and flabby. However, after a few weeks of food, water and rest, the humps are restored back to normal. Because the camel stores most of its fat content in the hump, its body is not insulated, allowing it to stay cool in the desert heat.

A calf is born without a hump but has small points of curly hair where the humps will eventually form, occurring once they start eating solids at about three months old.

So, if a camel doesn’t store water in its humps how can it survive without drinking? The camel can do this in many ways due to its ability to adapt to the environment.

First, its blood cells are oval which, even when losing 40% of water, allows the blood to continue circulating the body.

Second, they produce little water in their urine when they are forced not to drink, forming a syrup like texture, and their faeces become very dry, useful for lighting fires.

Lastly, the camel has an extensive range of normal body temperatures and does not begin to sweat until it reaches 105°F (45.5°C), thus conserving water.

A Dromedary camel can drink 104 litres of water and a Bactrian 120 litres of water in up to ten minutes. If there is no fresh water available, they can safely drink salty or brackish water. When camels drink, they drink to restore water that is lost but does not save any for future use.

Camels are without doubt an amazing animal, and their physiological make-up for coping with harsh, desert environments is incredible.