We cough to clear irritants and mucus from our throat.  The irritant will stimulate nerves that send a message to your brain, triggering a cough.  Coughs force air from our lungs at over 50 mph and can travel up to seven feet.  A vigorous cough’s velocity can approach 500 mph and in some cases, such as prolonged vigorous coughing, can even break a rib! 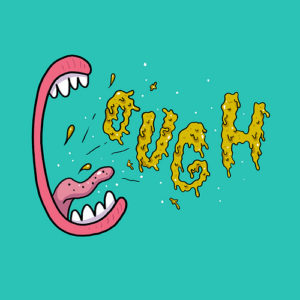 Some coughing is beneficial.  When we’re congested, we need to cough in order to clear mucus from our airway.  The mucus we expel during a cough is actually not the reason for our illness, but rather part of the cure.  This is because the mucus grabs the germs that are trying to replicate. As the mucus builds, it activates our cough reflex and expels the germs from our throat.

Another way coughing is helpful is when food gets lodged in our throat.  The coughing reflex is necessary to dislodge and expel it from our windpipe.

What Happens When We Cough?

First, your vocal cords open wide to allow additional air into your lungs.  Your epiglottis (the flap attached to the entrance of your larynx) then shuts off the windpipe while your abdominal muscles contract, increasing pressure behind your epiglottis.  As pressure increases, air is forced out, creating the sound we equate with a cough, as it passes through your vocal cords.

Why Do I Cough More At Night?

The main reason you cough more at night is gravity.  When you lie down mucus starts to pool in your throat.  This causes the gastroesophageal reflex to begin in an attempt to expel the mucus.

Another reason is because the air may be dry, aggravating an already irritated nose and throat.


When Should I See a Doctor About My Cough?

A cough is considered acute if it lasts less than three weeks, and chronic if longer than eight weeks.  You should see a doctor for any chronic cough, or if you have these symptoms:

To ease the symptoms of a cough drink plenty of fluids or take a teaspoon of honey to help loosen the mucus in your throat (however, you shouldn’t give honey to a child under the age of one).

There are many different types of coughs.  Sometimes that’s all a doctor needs to diagnose your illness, as is the case with croup or whooping cough.  Other times a cough is just one of many symptoms and requires further investigation by your doctor, as is the case with a dry, non-productive cough that has become chronic, or a productive cough associated with other symptoms.

Remember, don’t be so quick to condemn your cough, it just may be your body’s way of expelling those irritants or mucus before they develop into a bigger problem.

Have you ever coughed up a white nugget from your throat?  Those are called tonsilloliths or Tonsil Stones, stinky little globs of mucus, dead skin cells, debris, and bacteria that form in the pockets of your tonsils.  When the globs harden by calcification it becomes a tonsil stone.  They smell terrible, a mix of sulphur-producing bacteria that feed on the tonsil stones, producing emissions of hydrogen sulfide and methyl mercaptan.