Dogs are often found burying, unearthing and then again burying a bone or a toy. Have you ever pondered over why your pooch is always meticulously digging and burying its bone and spoiling your garden, backyard or even potted plants? The 2 main reasons for this are as follows. 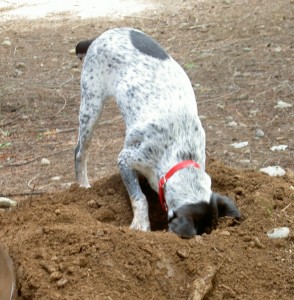 Pre-domestication period was as tough time for dogs as for any other wild animal – it involved hunting for food which was not as easily available to them then as it is now, in our houses (you know, ‘Pedigree’ wasn’t there that time).
Thus, to keep their prey/food safe from other animals and dogs in their own pack, wild dogs resorted to hiding their food by burying it deep inside the ground. This also helped in the safe storage of excessive meat which acted as a contingency reserve during prolonged spells of food scarcity. Safeguarding of their aliment by inearthing it served two purposes:

This was a need for survival earlier and is quite inconsequential now but, as it is said “Old habits die hard” so, almost all dogs even today have this characteristic trait which has been passed on for generations.

Besides burying things such as bones, toys and even sticks if you throw one when you take them for a walk, pet dogs today are also found to protect their favourite things, including doggie treats, by hiding it in their kennel or bed. It is an in-built genetic code, triggered by the same instinct as of their ancestors – to protect what is dear to them.

To Play With You

Another reason that your mutt digs and plays around in mud and dirt might be to gain your attention. If you do not spend much time with your pet dog or if he is in a playful mood, he might begin to dig frantically when you are around to catch your attention (some dogs are found to do this even on tiled floors). This is basically your pet telling you, “Hey! Come and play with me because I am all hyper and psyched”.

It is suggested and advised that you duly comply with your dog’s wishes to provide him with an outlet for his pumped up energy. Moreover, do not be surprised if your frisbee or ball goes missing the next day, for it has most probably being kept ‘safe’ by your faithful friend.

Hence, from this instant onwards if you observe your darling dog displaying an intensive digging behavior, do not be paranoid since it is nothing abnormal. Digging and hiding bones, food and toys is absolutely unrelated as to whether or not your dear friend is being fed and taken care of properly, it arises from a natural instinct to protect themselves or sometimes, even to play!

Related: 9 of the worst foods to feed your dog