Contrary to its name ‘The Great Wall of China’, is not one single wall; rather it is a series of many walls, the building of which began in earnest as early as 7th century BC. The Wall that exists today extends about 5500 miles (8850 km), although the full length (including rivers and hills) has been thought to be much longer than that – over 13,000 miles in fact. Its width ranges from about 4 metres to 9 metres and at its highest point it stands up to 7.5 metres tall. The most westerly point of The Wall lies in the city of Jiayuguan, and it runs East until it flows into the Yellow Sea on the Eastern Coast. 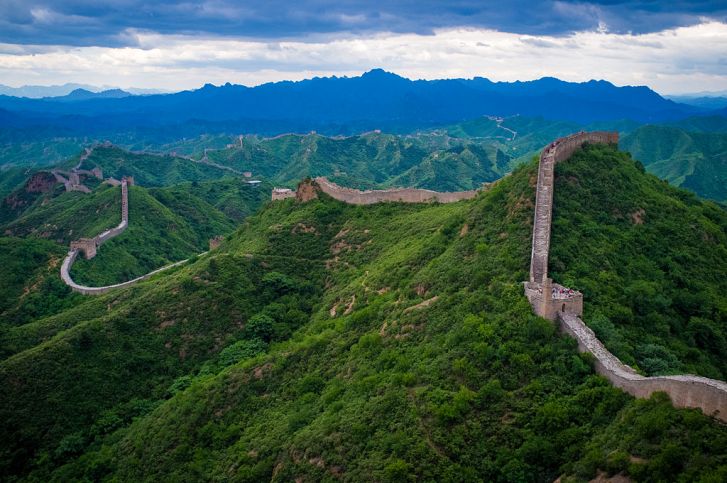 From the first wall built during the Spring and Autumn period (770-476 BC) to the last work on it during the Ming Dynasty in the 17th Century, the building of the Great Wall of China spanned over 2500 years, and involved over twenty states and dynasties, so the history, functions, and structure of The Wall are many and varied.

Why the Great Wall of China was built

If we start at the Spring and Autumn Period of Chinese History (770 – 476 BC), at that time, China was not a unified country, rather a collection of dozens of large and small states, many with their own rulers, armies, philosophies, and religions. Walls were built by each state as borders to define their own territorial boundaries. According to historical records, the first wall was built by the Chu state to prevent intrusion from the Jin and Qi states. Leading into a period known as the Warring States (476-221 BC), so called because the many states were at war with each other, the walls became defensive barriers to protect themselves from each other. At this time the walls were built from tamped earth and any useful materials, which lay around such as stones, rocks, and wood.

221BC brought the Warring States period to an end and ushered in the new era of the Qin Dynasty (221-206BC). China’s first Emperor Qin Shi Huangdi took power and he set about unifying all the states into one unified country. A new single state of China was born, not just in name, but in territory. Emperor Qin joined up all the walls and built new walls, making a Greater Wall, and bringing about a more systematic, unified fortification. In this period the unification of the walls symbolized the unification of the country; The Wall came to symbolize the strength and self-confidence of China as a unified state. Emperor Qin employed the ordinary people of China to build The Wall, and by making this labour a way of paying tax to the state, he used The Wall to create among the people, a sense of obligation to the state. They were united in building The Wall and building their state. The Qin Dynasty was a period of enforced wall-building.

But it was hard work, and tens of thousands of people, particularly young men, died whilst building took place.

This was one of the reasons why the Qin Dynasty became unpopular, and it was soon succeeded by the Han Dynasty, (207BC-200AD). The Han took the moral high ground and wanting to be seen as benevolent to its people, relaxed the wall-building a little. In this period, the Han Dynasty established the Silk Road, a network of trade routes, which officially opened trade with the West and brought traders from East and West into the country. Eastward traders brought gold, ivory, precious stones and metals to China, while Westward traders carried ceramics, jade, bronze, and iron.

However, inevitably where money and goods are exchanged, fights will break out, and The Han soon found problems occurring along the trade routes. Bandits ransacked caravans carrying trade, and nomadic tribes such as the Xiongnu regularly harassed traders on the northern and western borders. The Han went back to the strategy of wall-building for control, defense and policing purposes. They extended the walls and built forts along them in an attempt to hold back the Xiongnu. The Han used The Wall as a military base and extended The Wall every time they conquered new territory.

In this period, The Great Wall was strategic and economic; it became crucial in protecting the trade of the Silk Road and helped to maintain a Chinese presence throughout the region. It also helped to serve the transmigration of ideas, religion, and art. Buddhism came to China from Gandhara along the Silk Road.

The purpose of The Wall continued like this for the next few hundred years. For several centuries the Sui, Han, Jin and Northern dynasties continued to repair and improve numerous sections of the Great Wall to defend their territories from invading northern tribes. But the threat of the Mongol tribes from the North was a constant concern.

In the thirteenth century, the threat of the Northern tribes finally became a reality as the Jin Dynasty (1115-1234) came under heavy pressure from the Mongols, who in 1215 declared all-out war, under their leader Genghis Khan. After decades of fighting, the Mongols allied with the Southern Song and captured important territories such as the Western Xia and the Jin capital of Zhongdu. The last major battle between the Mongols and Jin was in the city of Caizhou when the Mongols besieged the city and finally overthrew the Jin Dynasty in 1234. The Mongols continued to conquer major territories including the Dali Kingdom. Under the leadership of Kublai Khan, one of Genghis Khan’s grandsons, the Mongols unified the vast land of the northern areas of China and established the Yuan Dynasty (1271- 1368) with Khanbaliq (modern-day Beijing) as its capital – the first time in history that the whole of China was conquered and ruled by a foreign ruler.

The Wall we know today

It was the Ming Dynasty that built most of The Wall that we know today. With the memory of the humiliating Mongol conquest hanging over them, the Ming Dynasty made defense their main priority and set about building a powerful, effective wall of strength, made from stone and resistant materials. Every emperor of the Ming Dynasty spared no effort in building, fortifying, extending and eventually completing the construction of The Wall. They built six passes along The Wall, which controlled entries and exits and were secured by gates and garrisons. Watchtowers, signal towers, fortresses, and observation posts serve as additional reinforcements. During the Ming Dynasty, the purpose of The Wall was a military line of defense. It also became an important point of communication, as troops lived along it in towers along with their horses and they were well supplied. In terms of trade, The Wall was extremely permeable as trade passed through such as metal, horses, and luxury goods.

The building of The Wall during this period was to reinforce Chinese control in China and hold back the Northern peoples. With the use of Chinese tiling, the manufacture of grey and white bricks and the carving of dragon symbols into The Wall, it also became a symbol for Chinese culture, aesthetics and the advance of science and technology. The Wall did pose a difficulty for the Manchus when they made their invasion in 1644, however, it could not resist them. The conquest by the Manchus, however, was more to do with the inward collapse of the Ming Dynasty who had struggled to keep pace with the growth of society, rather than any weakness in The Wall.

When the Manchu/Qing Dynasty (1644-1912) came to power in 1644, Manchuria and Mongolia were incorporated into the Empire. As such there was no more need to keep building The Wall because China had been conquered by the invaders that the Wall had been built to keep out. The Manchus regarded The Wall as an important cultural symbol and used it as a barrier to prevent ethnic Chinese from going into the Manchu area – their homeland, which they wanted to keep ethnically pure.

So there is where the building of the Great Wall ended.

There are of course many other places you can visit when touring China.