Adderall is a prescription medication that is given to those with attention deficit hyperactivity disorders, also known as ADHD. The drug itself is a combination of amphetamine and dextroamphetamine. Both of these are central nervous system stimulants. When taking this drug, it may help increase the ability to focus, pay attention, and control behavior.

The drug also stimulates the sympathetic nervous system, which is in charge of the body’s fight or flight responses. This is shown through pupil dilation, heightened blood pressure and heart rate, and increased sweating. Some of the primary reasons that Adderall is taken without having been prescribed include weight loss and an increased focus to perform well for work and school assignments.

Adderall can cause weight loss due to the fact that amphetamine speeds up the body’s metabolism and lowers appetite. Any weight loss is primarily temporary, and weight gain tends to occur upon stopping ingestion. However, this can lead to increased usage of Adderall as a diet pill, which is dangerous for multiple reasons. It “speeds up” a lot of the body’s primary functions, which can cause an irregular heartbeat, and even cardiac arrest.

There is also a rising trend of students using Adderall and similar drugs, such as Ritalin, to perform better on school tests and papers. A recent study conducted by the Substance Abuse and Mental Health Services Administration found that registered full-time students are twice as more likely to have used Adderall non medically than part-time students. Adderall is easily affordable and relatively easy to get hold of. Currently, according to the University of Wisconsin Madison, there is no correlation between using Adderall and heightened test scores or grades.

Adderall is oftentimes reported by individuals as having been used simultaneously with alcohol. Many individuals report using Adderall in order to negate the effects that alcohol may have later, such as nausea or becoming hung over. Individuals may drink more when taking Adderall due to the negation of common side effects that happen when drinking alcohol, however, this can lead to serious impairment, including alcohol poisoning and a possibility of death.

A common way of using Adderall is through crushing and snorting it to intensify the high. However, this can lead to side effects such as respiratory problems. When snorting Adderall, this can damage the nasal and sinus cavities as well as the lung tissue. Other side effects such as irregular heartbeats, increased aggression, and toxic shock are also reported. Prolonged use can lead to developmental problems in the brain, as Adderall can rewrite central neuron pathways and lead to negative changes in brain activity. 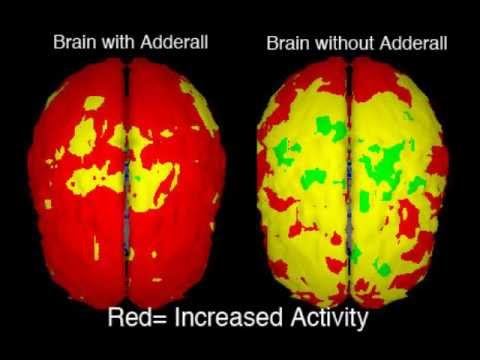 Some signs of abuse may include loss of appetite, irregular heartbeat, paranoia, nausea, insomnia, hallucinations, depression, and sexual dysfunction.

Read: Ecstasy could be a cure for cancer

Chronic abuse of Adderall can be seen in users who develop a severe rash, personality changes, and a heightened display of irritability. The most severe symptom of abuse is psychosis, which may present as having similar signs of schizophrenia. Developing an addiction to Adderall may present in the following ways:

What makes this drug so dangerous is that toxic symptoms from taking an overdose of Adderall can come in relatively small, unnoticeable doses. Some initial signs of an Adderall overdose can include tremors, restlessness, states of panic, and hallucinations. There will then be following signs of fatigue, depression, and gastrointestinal or cardiovascular symptoms. Medical professionals should be contacted immediately if someone is suspected to have overdosed on Adderall.

Adderall is a highly addictive substance, both for its perceived ability to increase productivity as well as the fact that it increases dopamine, which is associated with movement, attention, and pleasure. Immediately stopping Adderall use after abuse can lead to extreme withdrawal symptoms. Proper treatment either through inpatient or outpatient rehabilitation centers is recommended.