Maintain a safe distance between pet tarantulas and other pets in the home, as well as young children who might mishandle them. 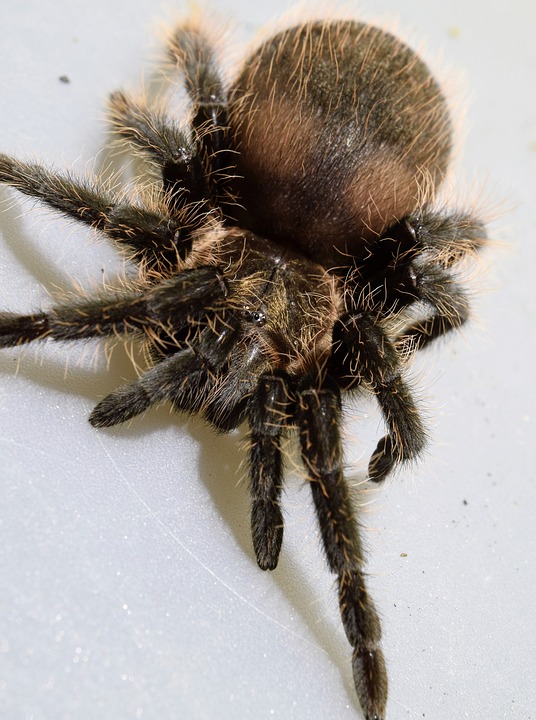 These spiders are generally peaceful, resilient, and simple to care for, making them ideal for those new to tarantula pet ownership. However, they need housing and food that is similar to their natural environment.

These are excellent creatures as pets because of their calm and docile nature, but if you are looking for an active play partner they may appear boring.  A curly hair tarantula will move about its enclosure and may even reorganize themselves among the objects in their cage, like a piece of bark. However, most of the time, your spider will remain quiet, until it is time to hunt.

Additionally, curly hair tarantulas often get irritated, so handling should be kept to a minimum. Certain spiders will not mind sitting on your palm or arm if you approach them slowly and softly. When interacting with these creatures, it is advisable to let them down on the floor as a fall from even a short distance can cause severe injury or death.

Curly hair tarantulas will utilize their defense systems if they are threatened. For example, they will kick out hairs from their abdomens, which may irritate a person’s skin and cause injury if they get into the eye. That is why, after handling them, you should thoroughly clean your hand and also avoid rubbing your eyes. Additionally, although they are usually gentle, curly hair tarantulas may chew to protect themselves. Their chew contains a little venom that, in most people, causes local pain, redness, and swelling, similar to a bee sting. However, some people may have more severe allergic responses, such as difficulty breathing. Although the curly hair tarantulas are gentle in nature they may bite to protect themselves, And their bites are mildly poisonous which can cause skin irritation, redness, swelling, and local pain, somewhat similar to a bee sting.

Curly hair tarantulas love solitude, so avoid keeping them with e other spiders of their kind. Instead, prepare to spend some time with them each week, keep time for feeding them, and cleaning their living area. And then enjoy the spectacle of this captivating species.

A 5/10-gallon tank is recommended for curly hair tarantulas’ living area. As these tarantulas are not strong climbers, floor space is more important than top space. The width of the tank should be two times the length of their leg so that they can spread their limbs.

Add a three-inch layer of chemical-free potting soil, peat moss, or vermiculite. Coconut husk can also be used as bedding, all these items are available at many pet stores. Then, you can also add pieces of a whole log, cork bark, and even part of a tiny clay pot plant to serve as a hiding place for your spider to burrow.

Maintain the tank’s temperature between 75-85 degrees Fahrenheit. You should use a heating pad underneath the tank to maintain the proper temperature, and often check with a thermometer to maintain it. Keep the tank away from direct sunlight. Additionally,  a humidity level of about 65 to 70% is necessary for your pet tarantula, which could be determined with a hygrometer. To increase the humidity in the tank, spray it with clean water.

After 24 hours, remove any uneaten food to keep the cage clean. Keep an eye out for mildew growth, which may occur due to the humidity. If you see any mildew forming in the cage, immediately remove it. Plan on changing the bedding altogether every 4 to 6 months.

Curly hair tarantulas feed on live roaches, crickets, waxworms, and locusts. The insects should be no larger than the size of your tarantula’s body. Younger tarantulas need feedings every two to five days, while adults eat approximately once a week. Consult your veterinarian to determine the proper quantity of food to give your pet.

Place the prey near your spider in the cage. It is best to feed the spider in the evenings when it is more active and ready to eat. Remove undesirable prey within 24 hours. Otherwise, it will stress your spider.

Curly hair tarantulas get the majority of their moisture and hydration from their food. You should always keep a small dish of water inside the enclosure. Ascertain that the spider has easy access to the dish and can climb out and in.

Tarantulas do not have many health problems when maintained properly with appropriate food and habitats. However, if your spider has become sluggish or has stopped eating, contact a veterinarian experienced with exotic animals, who can help you in identifying the underlying reason.

Generally, such behaviors indicate that the spider is about to molt. A tarantula loses its exoskeleton and regenerates a new one during a molt. A spider usually lays in its back with the legs snuggled in, when molting, household members unfamiliar with the technique may misunderstand this and think your pet is dying. The complete molt takes a few hours. However, the whole process may take weeks. The spider’s new exoskeleton will harden and become protective. Nonetheless, if you believe your spider’s molt is taking longer than it should or seems to be unusual, discuss this with a veterinarian.

If you are seeking to purchase a curly hair tarantula, you may try to locate a reliable breeder and purchase your pet for  $20 to $50, depending on the breeder. This is an excellent beginner’s tarantula and is a fascinating and docile creature to pet.