Earth is one of the most interesting planets in the solar system. Did you know that recent evidence suggests that Earth may not be the only planet known to support terrestrial life? However, this has not been verified yet and scientists are still conducting experiments. Earth is the only planet that is known to support both animal and plant life. In addition, of all the planets in the solar system, Earth is the only known planet that is not named after a mythological being.

Much of the known information about Earth continues to change as scientists make new discoveries. For example, it was not until the 16th century that it was discovered that the Earth orbits the sun. Previously, it was thought that the sun actually orbited the Earth. There are some interesting facts about Earth and here we look at 10 of them. 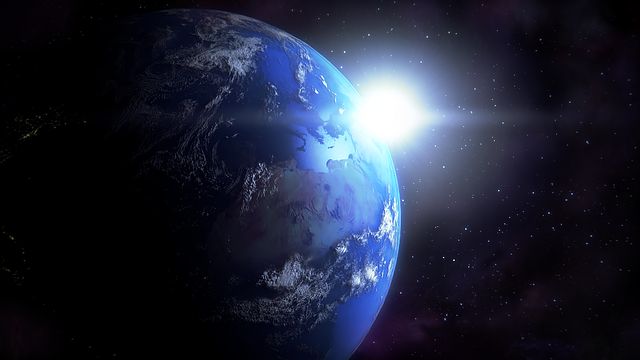 The planet is self-sustaining in terms of atmospheric conditions. The main gasses on Earth are nitrogen with 78%, oxygen with 21%, argon with 1% and traces of other gasses such as carbon dioxide. To ensure sustainability, oxygen is derived from plants when they convert carbon dioxide (CO2) into oxygen during the process of photosynthesis. Therefore plants are important for ensuring sustainability of life on earth. The above percentage of gasses must be maintained to ensure plant and animal life is possible.

Did you know the Earth is sometimes called the Blue Planet? This is because it is covered by 70% water and the other 30% is dry land. About 97% of the water is salty and is therefore not consumed by human beings. Only 1% of the water on Earth is useful to human beings and is used for drinking, cooking, heating, cooling as well as industrial processes.


There are 7 continents on Earth. Asia covers around 30% of the land area on Earth. However, it represents 60% of the population in the world. Australia is the most isolated of the 7 continents and therefore least influenced by migration of people and animals. There are unique animals in Australia such as the kangaroo, wombat, and koala. On the other hand, Europe has many historical events that have shaped the world we live in today and is known to have many ancient civilizations such as Romans and Greeks.

It is predicted by scientists that the future of Earth is mainly tied to the future of the sun. Therefore as long as the sun shines, Earth will continue to support life. Nonetheless, climate models show that climate change is likely to affect life on Earth in future because of increased carbon dioxide C02 in the atmosphere leading to increased temperatures. If temperatures rise too much, life would be unbearable for both animal and plant life. It is, therefore, important to ensure conservation efforts.

The Earth has tectonic plates that move against each other. When they collide, one of them goes underneath the other and in the process fresh crust forms. As much as this process leads to activity such as volcanic eruptions and earthquakes, it is important for the carbon cycle and prevents excessive greenhouse effect which happens to other planets such as Venus. If this process does not happen, there would be excessive carbon leading to excessive heat on earth.

6. The Earth is not round

For a long time most people thought that the Earth was round, but this not the case, thanks to modern advancements in space travel and scientific discovery. The shape of Earth is actually a spheroid which is like a flattened sphere.

The common knowledge is that the Earth rotates on its axis in a period of 24 hours. But did you know that it actually takes 23 hours, 56 minutes and 4 seconds?

8. But the rotation is slowing

The rotation of the earth around its axis is estimated to be slowing by about 17 milliseconds every 100 years. However, this is not perfectly uniform. Therefore it is estimated that ultimately, the normal day could have 25 hours and not the usual 24. However, the current human life may not experience it because it is estimated to take 140 million years until the length of the day is increased.

The human population on earth is estimated to be about 7 billion and projections show that the population could grow to 9.2 billion by 2050. One-eighth of the Earth’s surface is suitable for human beings to live. About 487 people have visited outer space and 12 have walked on the moon. Currently, the only human beings in space are on the international space station.