A lucky explorer would not have imagined that he would give his name to 2 major continents around the world. Yes, an interesting fact is that North America got its name from Amerigo, the great Italian Explorer who discovered this massive continent around the 15th Century. Interestingly enough, the Latin version of the word Amerigo in its feminine form came into existence as “America”.

If someone assumes North America is a continent made of 3 the biggies – the United States, Canada & Mexico they are in for surprise. This continent is a huge landmass and encompasses around 23 states. The Northern Hemisphere forms the bed containing the whole of the North American continent which occupies a landmass of 25 Million Square Kilometers.

From a visitor’s point of view North America is a heaven. From the incredible, intriguing rocks of the Grand Canyon, to the American road trip along the Historic Route 66 to iconic theme parks and much more. North America is dotted with plenty of attractions and one needs to visit this continent to experience as many of these attractions as possible. Here I have limited and focused my attention on a few major spots, their significance, and why they stand out.

Unlike the Mexican Barranca Del Cobre,  the Grand Canyon is formed by a single canyon and is the largest “single canyon” in the world. This is one of the world’s most visited natural formation with the number of visitors steadily climbing over the years. Some even go to the extent of dubbing it as the world’s greatest holiday retreat just for its stunning visual pleasures. 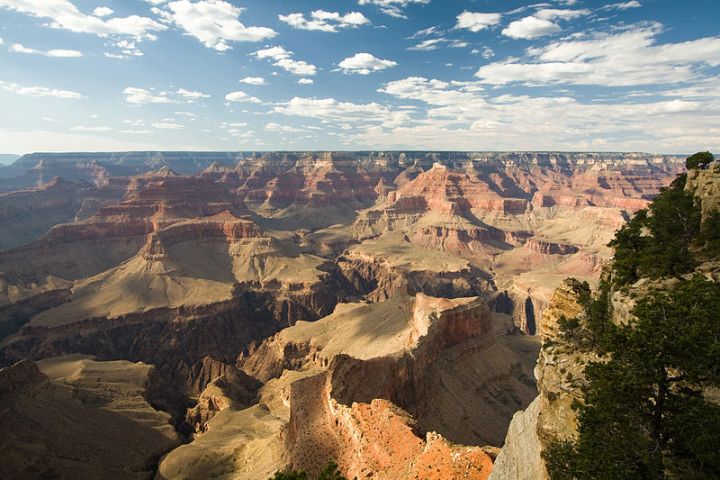 A beautiful view of the Grand Canyon

Most people who are exposed to the pictures of the Grand Canyon that are circulating online believe it’s just a sightseeing from the South Rim, at a height of 7000M. But this ravine offers much more than that. It offers a plethora of choices from hiking, running and there is even white water rafting. Adventurous people who have a passion for an adrenaline rush go for recreational water rafting on River Colorado. Grand Canyon has something for everyone. If one wants just to meditate – they can, if one wants to just sit and marvel at the natural beauty – they can do it for hours and if one wants sheer adventure – yes, that’s possible as well. This place is both stimulating as well as has a calming effect on people and a must experience journey in North America.

Generally, peoples’ amusement on the world’s best man-made structures and natural beauties get etched in their memories, due to the wide range of life changing experiences they go through. But a road trip on the US route 66 is timeless, legendary and it imbibes long lasting memories on travelers, who crisscross this iconic American highway. It extends from Chicago to Los Angeles and covers a total of 3,940 km. That’s very long by any country’s standard.

To know the specialty of this route and marvel about the contemporary road trip experience, one needs to take a sneak peek into it’s history. Originally, it was called the Route 66 and people who traversed this motorway were fascinated by its deep-rooted timeline of America. As this route looped through numerous towns and was dotted with motels, gas stations, and tourist spots, it was referred as the “Main Street of America” during the times of World War II. Later, old Route 66 was bypassed with highways and in 1984 it was christened with its modern name “Historic Route 66”.

Route 66 is brimming with full of history, as it weaves its way through the heart of the country and offers some of the best, classic, roadside scenes US has to offer. USA, as a country, has it everywhere, be in its Cinemas, best-selling song lyrics and even in its folk tales. Route 66 is immortalized as the greatest symbol of a great American road trip. 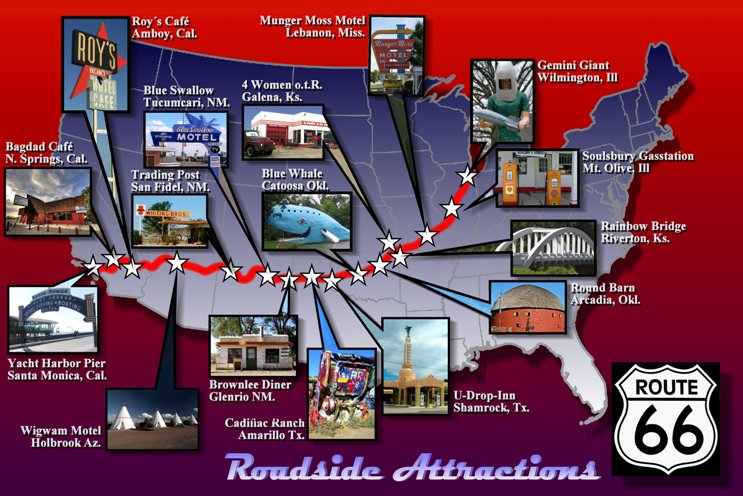 Some of the many attractions along Route 66 (image source: Wikipedia)

One who takes a trip on this route is guaranteed to have the journey of a life time, overflowing with adventure and discovery. You will see motels that are themed after Aliens, suddenly you will pass through scary ghost towns and you will even detour for the great Grand Canyon, while on a road trip through this America’s beloved Mother Road. Its long journey into the history of America crossing through and it offers many experiences to one’s senses such as country music, rock-n-roll, snow-cones and cowboys, – its classic America all the way, as you coast through this world famous road.